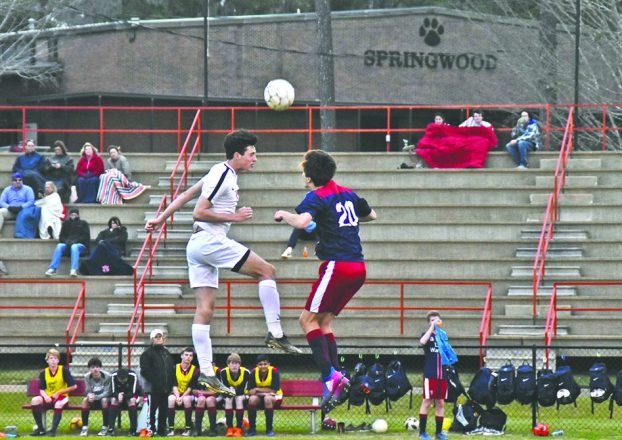 Springwood School sophomore Coleman Hull (left) goes for a header in the second half of his team’s game against Lee-Scott Academy on Tuesday. The Wildcats fell in overtime, 3-2. (Photo by Sam Chandler)

Slowly but steadily, the Wildcats saw it disappear.

Lee-Scott netted three unanswered goals, including the game-winner with 40 seconds left in overtime, to capture a 3-2 comeback victory over the Wildcats on a cool, windy evening at Springwood Stadium.

“I’m extremely proud of them, every one of them,” Springwood head coach John Lanier said of his players. “That team is, I believe, 10-1 on the season and made the final four in state last year, and we took them to overtime.”

Despite its sparkling credentials, Lee-Scott looked vulnerable at the outset. Springwood capitalized.

Spurred by the attacking play of forwards Kannon Key and Coleman Hull, the Wildcats jumped out to a 2-0 lead in the first 20 minutes.

Hull scored his first goal on an indirect free kick taken inside the 18-yard box. Springwood earned the golden opportunity after Lee-Scott’s goalkeeper was penalized for an illegal touching infraction. He used his hands to pick up the soccer ball on a backward pass as Key applied pressure.

Hull took advantage of the miscue, firing a shot through a wall of defenders. Key tallied the assist.

“We wanted to come out and get the first goal, and we did that,” Lanier said. “It helped with confidence.”

Hull struck again a few minutes later. The sophomore intercepted a pass along Lee-Scott’s backline, raced toward the goal and slotted a low shot inside the left post. Springwood took a 2-0 lead into halftime. But after the break, Lee-Scott mounted its comeback.

The Warriors trimmed the deficit to one at the beginning of the second half before scoring the equalizer with less than three minutes remaining in regulation.

The teams entered overtime tied, 2-2. That’s where the score stayed until the tail end of the 10-minute extra period, when Lee-Scott notched the winner.

The loss dropped Springwood to 3-3 on the season. The Wildcats will return to the pitch on Saturday when they host Emmanuel Christian in their home finale.

“It was a great team effort,” Lanier said. “We’re still looking for playoffs, and we still have that within reach.”