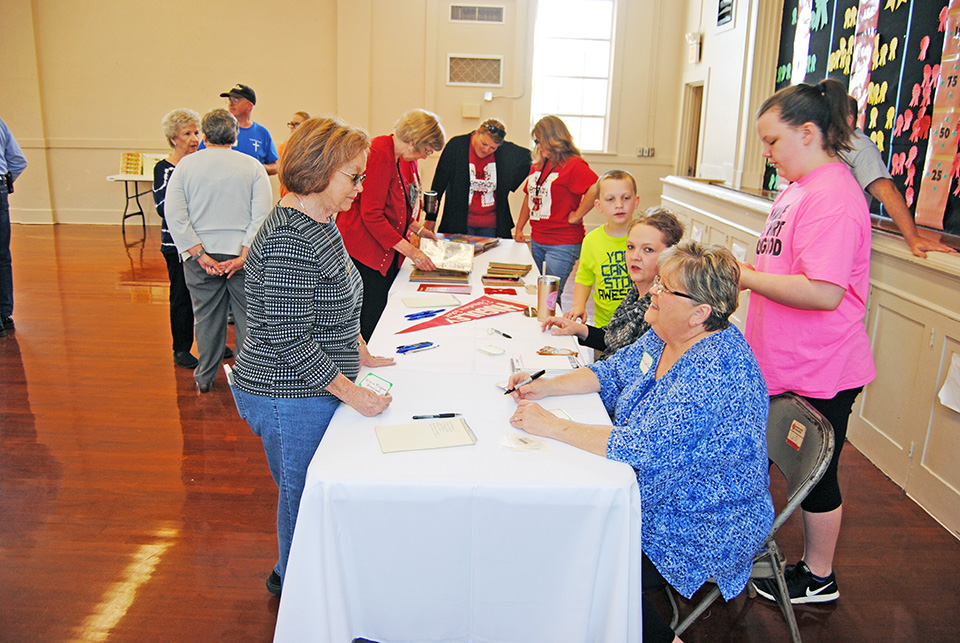 Photos by Wayne Clark | Times-News RENEWING OLD TIES: ABOVE: Some former Huguley school friends who hadn’t seen each other in a long time renewed acquaintances at Saturday’s first-ever Huguley School reunion. After the first school was lost to fire in 1940, a brick building in the shape of an H went up on the same site. There have been a number of expansions since then.

HUGULEY — There was a good turnout at Saturday’s first-ever Huguley School reunion. It was an ideal time for former classmates to get together for some reminiscing about the fun times they had in their growing-up years.

“We are hoping to continue this in future years,” said Brown, who attended the school in the mid-1960s.

“Our class has a reunion every year on the second Saturday in June,” she said. “We usually get around 30 people. This is the first time we’ve ever had a reunion for everyone who’s gone to school here since 1938. It’s amazing how many former classmates we’ve found on Facebook. Most of us still live in the local area, but we’ve located some people who are living in places like Missouri and Florida. It’s good to have a reunion. We enjoy each other’s company.”

Three of the school’s six principals were in attendance at the reunion. They included the current principal, Benji Mitchum, who’s been there the past five years; Doug Hubbard, who was there from 1978-98; and Curtis Guy, who was there from 1974-78. Dr. Nancy Maples, the current director of elementary schools for the CCSD, was the principal from 1999-2013. The school’s first principal, Charles “C.M.” Reeves, was succeeded by Noel Allen in the late 1950s. Mr. Allen helped start the Huguley Water System.

Mitchum led groups of HES alumni on tours of the building and gave them an idea of what goes on in today’s classrooms.

The attendees included Patsy McCain, who taught school at Huguley for more than three decades. She commended Carol Meadows on having been an excellent teacher aide.

“We had a time here,” she said. “Carol was as good to work with children as anyone I ever worked with. She was so good at teaching them the multiplication tables.”

The first school for the Huguley community was a wooden building that was destroyed by fire two years later, in 1940. It was replaced by the brick building that stands today. In honor of the Huguley family (which donated the land) the school was built in the shape of an H. There were four classrooms on each side with the crossbar being an auditorium.

The school has gone though some expansions over the years. The first one took place in 1950, when a seventh grade was added. The next addition took place the next year when a new lunchroom and two new classrooms were added for an eighth grade. Another wing was added in 1952-53 for the ninth grade.

A new lunchroom was built in 1969 and the old one was renovated into classrooms. More new wings were added in 1971 and 1973. A new gym was added in 1984-85. Another new classroom wing was added in the past ten years.