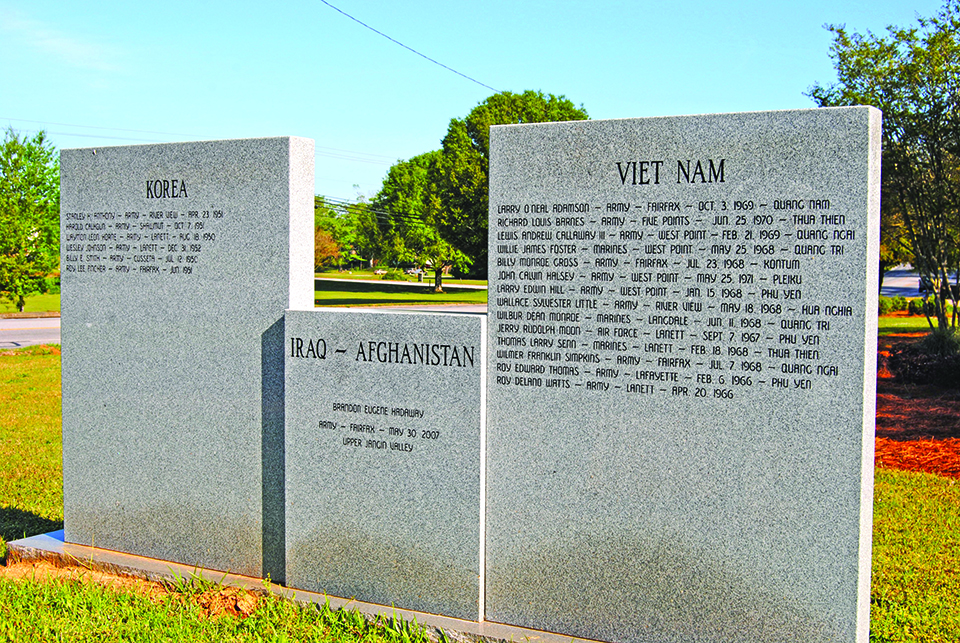 Wayne Clark | Times-News FALLEN SOLDIERS HONORED: Seven local soldiers who died in the Vietnam War in 1968 will be honored in this year’s Memorial Day program at Veteran’s Park. Surviving family members are invited to attend the program.

VALLEY — There will be two significant anniversaries to observe in this year’s Memorial Day and Veteran’s Day programs, and American Legion Post 67, Valley, is making plans to have appropriate ceremonies.

This year marks the 50th anniversary of the Tet Offensive, widely regarding as a turning point in the Vietnam War. Nov. 11 of this year will mark the 100th anniversary of Armistice Day, or the end of World War I.

At Tuesday evening’s monthly meeting of Post 67, Commander Lanny Bledsoe discussed plans for this year’s Memorial Day program, which will be taking place at 11 a.m., Monday, May 28th at Veterans’ Park.

Bledsoe noted that there are 14 names on the Vietnam memorial in Veterans Park. Seven of them died in 1968.

“We will be honoring the men who died that year in this year’s Memorial Day program,” Bledsoe said. “We’d like to reach out to the community to see if we can have any of their surviving family members at the program.”

“Finding some relatives of these men will be our task between now and the Memorial Day program,” said Bledsoe. “We’d very much like to honor their sacrifice to our country by having some of their family members there.”

The local Post is also planning to have a third annual Day for the Veteran this summer at Valley Community Center. This will be an opportunity for local veterans to find out about some benefits they may be entitled to but not know about. Representatives from the Veterans Affairs office in Opelika, the Veterans Administration in Tuskegee, Vet to Vet and other such organizations will be there to speak one-on-one with veterans.

“We will be getting the word out about this when we settle on a date,” Bledsoe said. “We’d like to have a good turnout for this. We think it’s very beneficial for those who come out, and we’d like to help them.”

At 8 a.m. on Saturday, May 5, Post 67 members will be at Valley Haven School to participate in a flag-raising ceremony to mark the start of the 2018 Hike/Bike/Run.

The Post is looking for someone who can drive their DAV van to Tuskegee one day a week or so. It’s important to find qualified people who are willing to do this to keep this vital service going. The van is going to Tuskegee one day a week. Another driver would keep this important program going. It gets local veterans to and from the VA Hospital for their medical needs.