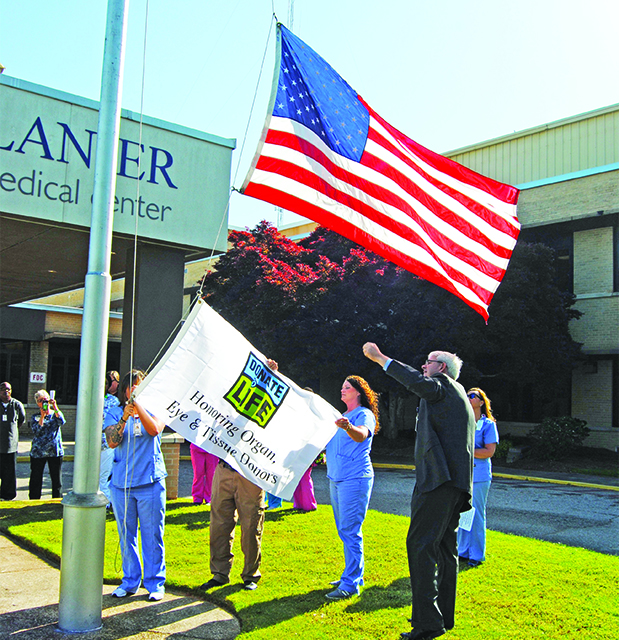 Wayne Clark | Times-News CELEBRATING LIFE: Organ donation was hailed at a Thursday morning program outside the main entrance to EAMC-Lanier Hospital. Above, Katelyn Oliver, David Maddux, Linda Lynd and Administrator Greg Nichols raise the U.S. and Donate Life flags. The EAMC-Lanier flags are now flying at half mast in memory of long-time greeter Ralph Bowers, who died this week.

VALLEY — A group gathered at the flagpole outside the main entrance to EAMC-Lanier Hospital Thursday morning heard an inspiring story from an EAMC-Lanier nurse. The group was gathered for a ceremony to celebrate the proven success of how life can be sustained through organ donation.

Katelyn Oliver, R.N., a patient care coordinator for EAMC-Lanier, told the crowd that she has two major reasons to be a strong advocate for organ donation: one, donated organs have saved her dad, Lee Oliver’s, life on two occasions, and two, her dad’s condition motivated her to seek a medical career in the hope of making a difference in people’s lives.

“My dad was diagnosed as a diabetic when he was 17-years-old, and we have dealt with it all our lives,” she said.

Her dad struggled with Type I diabetes for many years. In the summer of 2003 his kidneys started to fail. He was put on dialysis until a suitable donor could be found. Mr. Oliver would need not just a kidney but a pancreas as well.

“In January 2004, we got word that there was a match,” Katelyn said. “It was from a young man who had been killed in a car wreck. He was thoughtful enough to have been an organ donor.”

Mr. Oliver was in the hospital for over a month, but the transplant was a success. Not only did he have a functioning kidney but the new pancreas cured his diabetes.

The Oliver’s wrote the family of the young man who’d donated the organs to express their gratitude.

“They wrote us back,” Katelyn said, explaining how the young man’s family was pleased that the loved one they lost was giving life to another person.

Donated kidneys usually last around 10 years. “A few years ago, my dad had to have another transplant,” Katelyn said. “My Uncle Robby offered to donate it,” she said. “He was not a match for my dad, but we were able to get a match that way through a swap program.

“He’s been fine ever since,” Katelyn said, noting that her dad’s life has been saved twice because of donated organs.

“Please be thoughtful and give the gift of life by being an organ donor,” Katelyn said.

Present in the crowd were two local women, Kathy Underwood and Linda Beckum, who have received donated kidneys.

There’s a special float in the annual Rose Parade in Pasadena, Calif., that honors both the donors and the recipients.

People can purchase flowers that are displayed on the float by going
to www.donatelifefloat.com.

Individuals can be organ donors on their driver’s license or by going to www.registerme.org or www.donatelife.net.