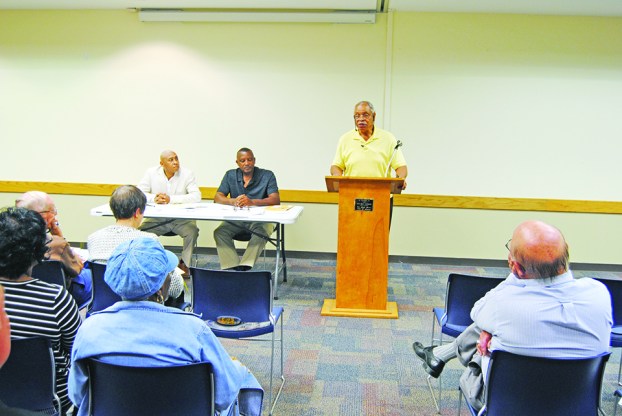 Wayne Clark | Times-News CANDIDATE FORUM: Fredonia Mayor George Fannings was among a host of candidates speaking at a forum held Thursday evening at Bradshaw-Chambers County Library. Fannings is seeking a position with the Alabama Democratic Party. A good many candidates seeking offices as Democrats or Republicans in the June primaries and the November general election took advantage of an opportunity to state their views to the public.

VALLEY — A candidate forum held Thursday evening at Bradshaw-Chambers County Library drew some good participation on the part of the candidates for local and state offices. The forum was sponsored by the Chambers County New South Alliance with Dr. Randy B. Kelley serving as the moderator.

“Republicans aren’t listening to us.’ They aren’t even listening to each other.” Hagan said. “We need a Representative who is willing to listen and to work together for Alabama.”

Hagan said she wanted every Alabamian to be able to access affordable, quality health care, to have good-paying jobs in the district, to make our schools the best they can be and “to fight for women to have equal pay for equal work and to stop attempts to roll back health care.”

The incumbent probate judge, Brandy Easlick, said she felt uniquely qualified for the job because she had practiced law 14 years before becoming probate judge and also had a background in accounting. “We have implemented some improvements in the office in the five years I’ve been on the job,” she said, “and we have some other ideas we want to try. I think our tag office is more efficient. Wait times have been cut from two-and-a-half hours in some cases to no more than 10 or 15 minutes.”

Paul Story, another candidate for the office, said that he’d been around public service all his life and had learned much from his dad, former Circuit Clerk Charles Story. “I believe in providing the best service we can to our citizens,” he said. “I will the an open-door policy. If you have a problem you can come and talk to me about it. I want to foster a family-oriented environment in the probate judge’s office.”

Incumbent State Rep. Bob Fincher said that it had been an honor for him to serve the people of District 37. “I haven’t missed one day of the legislature when it’s in regular session or in special session,” he said. “I listen to what everyone tells me and I vote the way I feel the majority of people in District 37 want me to.”

His Democrat opponent, Charlotte Clark-Frieson, said that she favored equal pay for women, affordable health care and “to fix the 70 poorly performing schools in Alabama.”

Incumbent Coroner Jeff Jones said that his long-time experience as a funeral home director had given him the skills needed to discuss tragedies with families in a sensitive and professional way. Jones is seeking his fourth ter.

Challenger Mike Cox said that he loved public service and that his long career as an investigator with the Valley Police Department had given him the skills needed should a death investigation be needed.

His Republican challenger, James “Moto” Williams, said that Chambers County will be facing financial pressures in the coming years, with issues like jail renovation to be dealt with. “I want everyone to know that I don’t believe in new taxes,” he said.

A couple of the candidates, State Senate candidate Darrell Turner and District 38 candidate Brian McGee, spoke in favor of the Affordable Care Act and that it would be good for the state if the politicians would get out of the way of blocking it. Turner said that he’d been a Democrat since 1968 and would never change parties. “I’m not a switcher or a changer,” he said.

“I know what our store fronts look like and that our roads are in bad shape,” he said. “It’s a shame that our kids have to go out of state to find a good-paying job.”

VALLEY — A group gathered at the flagpole outside the main entrance to EAMC-Lanier Hospital Thursday morning heard an inspiring... read more