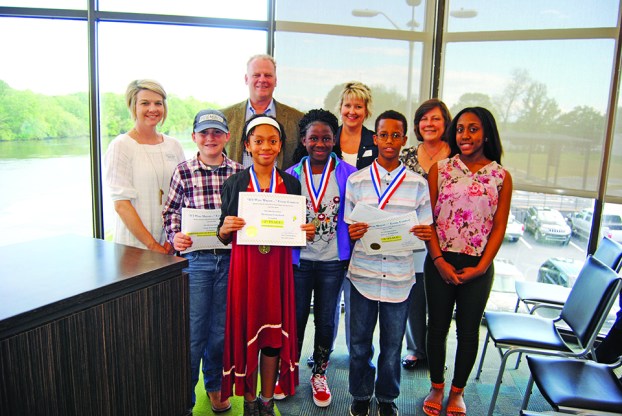 City honors ‘I Want to be Mayor’ essay winners

WEST POINT — A special event during Tuesday’s West Point City Council work session was the naming of winners in the “I Want to be Mayor” essay contest at West Point Elementary School.

Point University professor Dr. Lacey Southerland talked to the council about the contest rules and read some snippets from the winning essays. Fifth graders from WPES took part. Their assignment was to write a five-paragraph essay that includes five specific goals they have for the city. A three-member panel of Point educators and students judged the essays. There were 38 of them, all of them with some good ideas.

“We looked for creativity, critical thinking and energetic writing,” Dr. Southerland said. “We also had some requirements for technical writing.”

“The worst you’d get hurt in an accident would be to skin your knees,” they wrote.

Another idea was to raise teacher salaries (a popular idea with the judges and council members). Some students appealed for ways to eliminate school violence.

“It’s not easy to see people die,” they wrote.

The top three winners were Aurriyiona Spence, Breanna Crawford and Aaron Robinson. Receiving certificates for creativity were Grace McQuinn Ledford and Davion Williams. Raygen Godfrey was awarded a certificate for for critical thinking, Jayce Haywood got one for engaging writing and Jose Callejas earned a certificate for writing.

In other action at a special-called meeting, the council approved an amended property exchange between the city and the West Point Development Authority. The action was previously approved, but with some of the property inadvertently omitted. The amendment includes all the property the two entities had agreed to.

The city will be receiving the Technology Park property, which includes the Active Life, or Senior, Center and the Youth Center. The city already owns the buildings, while the WPDA owned the land. The city swapped some lots with equal value on East 10th Street to get ownership of the Technology Park site.

The council discussed other issues in a work session, but did not take action. That could take place in the next regular meeting of the council, which will be held 5:30 p.m. on Monday, May 14.

The council is considering declaring some property surplus for the purpose of having it put on a state list of items for sale. Among the items that could be declared surplus in the next council meeting are a 1972 bucket truck and a 1993 Ford Econoline van.

There was also discussion of a revised driver safety policy and a policy on mobile food vendors in the city.

“We have had discussions with people who want to do this,” said City Administrator Ed Moon.

In particular, people who drive ice cream trucks have been asking about it.

The council is considering allowing this from 8 a.m.  until 10 p.m., providing it’s a mobile business and has the proper decal. They won’t be allowed to sell alcohol, have loud music or noise-making devices.

The council is also considering a tree ordinance that would apply to trees on city property. Doing so would be making official what the city has done for years.

In the May 14 meeting, the council will be making appointments to the Hawkes Library Board and to the city’s Planning Board. Council Member Sandra Thornton said she’d like to see more citizens and fewer city employees on boards that are appointed by the council. This would allow for a broader cross-section of the community to be involved in decision making.