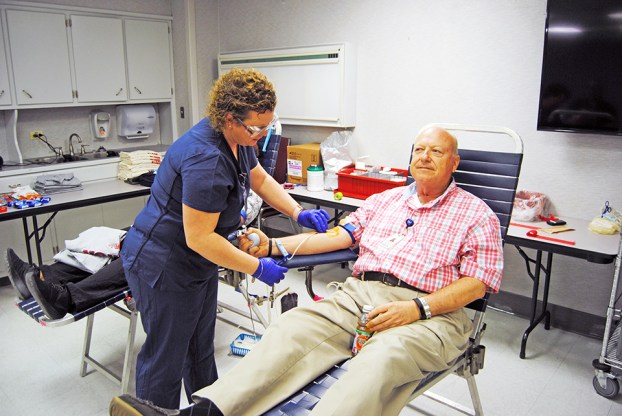 Wayne Clark | Times-News THIS WON’T HURT A BIT: Tommy Lane, vice president for EAMC-Lanier Health Services, was one of many hospital employees giving blood on Thursday. Staff from the LifeSouth Community Blood Bank were at EAMC-Lanier for a blood drive. At left is Jessica Pike, the donor tech.

VALLEY — Staff members of the LifeSouth Community Blood Bank got to do something a bit unusual on Thursday. They had the chance to get off the bloodmobile to get blood donations.

“We’re on the bus most of the time,” said LifeSouth donor recruiter Robert Jenkins. “We’re inside today because we’re at a hospital. EAMC-Lanier has the facilities for us to set up, and it’s more convenient for their staff. They can come down to the first floor on a break, donate blood and go back to their station.”

Based in Opelika, LifeSouth has been an important cog in serving east Alabama and west Georgia hospitals with blood since the 1970s.

“We have two mobile units,” Jenkins said. “One unit is in the Opelika-Auburn area and the Phenix City-Columbus area. The second unit is in Auburn, LaFayette, Roanoke, LaFayette, Valley, Lanett, West Point, LaGrange and Newnan. We supply blood to hospitals in the communities where we receive donations.”

There’s a LifeSouth bloodmobile on the road in its service area seven days week.

“We alternate with two teams,” Jenkins said. “We have a shift that’s active and ready seven days a week.”

LifeSouth has a daily goal of 16 units (or pints of blood) per day. If they average that number, the east Alabama-west Georgia blood supply should be in pretty good shape. There are times of the year when there are peak demands for blood.

“It’s usually around the holidays,” Jenkins said. “During Thanksgiving and Christmas, especially around New Year’s and again around the Fourth of July, the need for blood usually spikes. It’s the holidays, and more people are on the road. There’s usually more accidents when this takes place.”

“We have ‘park-it’ places like Walmart stores and community centers when we’re not at a hospital,” Jenkins added. “There are usually people waiting us to arrive. People can give blood every 56 days. The people who are waiting on us are the ones who give blood every time they can. We like to call them ‘galloneers,’ because they have given gallons of blood over time. We have lots and lots of people we have given galloneer awards to.”

On each visit of a LifeSouth bloodmobile there are at least three donor techs and a recruiter on board. They have a motto: “20 versus 3.”

“What that means,” said Jenkins, “is that it usually takes you 20 minutes to donate one point of blood, but that one donation can save three lives.”

LifeSouth will be having a special event at CVS in Lanett on Thursday, April 26.

“It will be in memory of Howard Fawley, who was killed by a drunk driver,” Jenkins said. “We want to raise awareness of the problems of the dangers presented by driving while drunk.”

“It’s a good idea to donate blood,” Earnest said. “You can learn your blood type, if you don’t already know it, and they can check your hemoglobin and glucose levels. They can also check your cholesterol level, and it won’t cost you a co pay.”

LANETT — Lanett resident Johnny Miles had a lengthy career in the U.S. Army, spanning one war in Asia to... read more