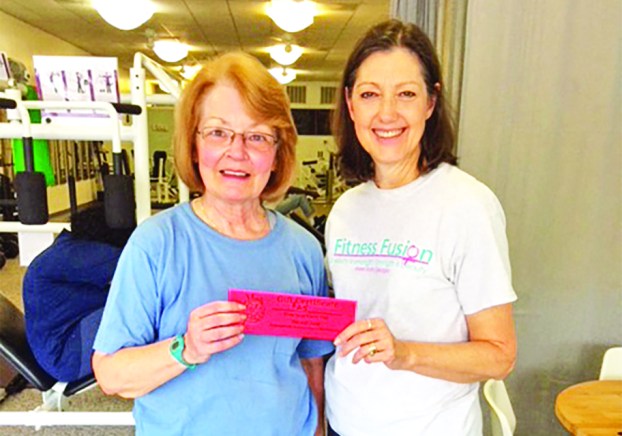 Submitted Photo | Times-News Certificate presentation: Fitness Fusion in West Point recently had a membership drive and in house promotion where 500 pounds of food was collected for the Christian Service Center. Pictured above is Pat Harriger, left, the winner of the drawing, and Jan Gagnon, gym manager.

Started on March 1 and running through the entire month, members of the gym could bring in 10 pounds of food or more for a chance to win a gift certificate to Johnny’s New York Style Pizza.

Non-members could also participate. If they also brought in 10 pounds of goods, they would receive half off a membership.

“It was a success,” said co-owner Heather Hoats, who owns the business with her husband, Kenneth.

Hoats added that 22 current members participated while 8 new members were signed up as a result of the promotion.

As a way of judging how much was brought in, a scale was placed at Fitness Fusion.

“Some brought in more than 10 pounds of food,” Hoats said. “We had so much food we had to move it because we were afraid someone would trip over it.”

All the food raised was donated to the Christian Service Center.

Cheryl Myers, director of the center, provided Fitness Fusion with a list of needed items.

At the end of the month, all the food was donated and Pat Harringer was chosen as the recipient of the certificate.

Hoats added that since opening in May 2017, this is the second time Fitness Fusion has participated in a collection drive.

After Hurricane Irma, the gym along with Chattabrewchee collected items to donate to a church in Florida. West Point Mayor Steve Tramell also helped out.

“It was definitely a community effort,” Hoats said.

Next up for Fitness Fusion is the April promotion. Anyone can purchase a $25 Group Fitness Punchcard (6 classes for the price of 5). A non-member can attend any of group fitness classes for just $5 per class, normally.

VALLEY — Police officers have a tough job and most try to find some way of making it a little... read more