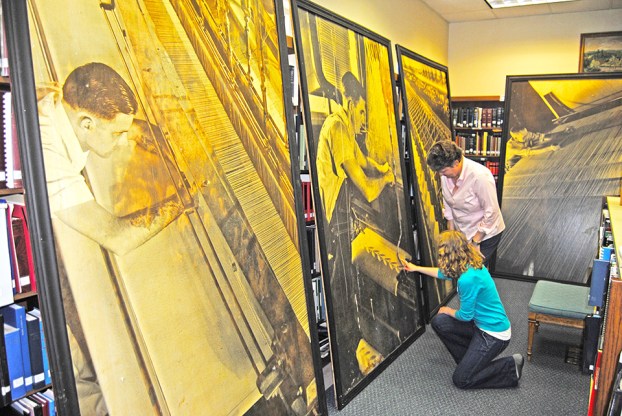 WAYNE CLARK | Times-News A REALLY CLOSE UP INSPECTION: Cobb Memorial Archives in Valley received a visit from photo conservator Monique Fischer on Thursday. Above, archivist Robin Brown shows her the six Margaret Bourke-White photo murals it has. They were taken in the local mills in the late 1930s by the famed photojournalist. Fischer has done some extensive research on Bourke-White at Syracuse University, which has an extensive Bourke-White collection. During her Thursday visit, Fischer conducted a workshop, offering advice on the care and preservation of photographs.

VALLEY — On Thursday, Monique Fischer had the chance to see some large photo murals she had read about while doing research on the works of Margaret Bourke-White at Syracuse University.

Cobb Memorial Archives has six such murals. They are four-and-a-half-feet wide and eight feet tall. They are huge enlargements of photographs taken by Bourke-White on a tour of Chattahoochee Valley textile plants in 1937.

A Massachusetts resident, Fischer is a photo conservator whose visit to Bradshaw-Chambers County Library was funded by the National Endowment for the Humanities.

“It’s quite a piece of history the archives has here,” she said.

For the most part, the photo mural are in pretty good shape, given that they are more than 80 years old and for many years weren’t kept in the best of conditions. Some of them bear some damage.

Fischer said that it might not be a bad idea to digitize the originals to make some reproductions for display.

“The originals need to be put away for safe keeping,” she said.

For many years, the photo murals were attached to the walls of the West Point Manufacturing Company Testing Lab near Shawmut Mill.

During her visit, Fischer conducted a workshop, offering advice on how to care for and preserve photographs.

Bourke-White’s visit to the Valley was arranged by Carlton Richmond of the Wellington Sears Company in Boston. She took photos in Lanett, Shawmut, Langdale and Fairfax mills. Carl Gaither of the WPMC Research Department was her guide. He showed her all the local mills before she decided which scenes to shoot.

To get the right angle, she would climb tall ladders where she could look down on men who were at work on such machines as looms, slashers, slubbers and a jacquard loom making Martex towels.

Bourke-White took photographs over a two-day period, Gaither offered a helping hand with the lighting. She chose six images for reproduction in the huge murals.

Several weeks after she’d left, a messenger from New York came to the Valley to deliver the pictures.

At the time, they were only around two feet by three feet, but with some rubbing and stretching done by the messenger, they were extended to their full size of four-and-a-half by eight and with breathtaking detail.

Bourke-White (1904-1971) is best known as the first foreign photographer to take pictures of the Soviet five-year plan. She was also allowed to photograph Joseph
Stalin. She was the first female war photojournalist, taking pictures of Russian’s defense against the Nazi invasion 1941.

Her photo of the Fort Peck Dam appeared on the front cover of Life magazine on Nov. 23, 1936.

Chambley’s has changed a lot over the years

VALLEY — Things change as time goes on and this concept is exemplified at Chambley’s in Valley. Opened in 1983... read more