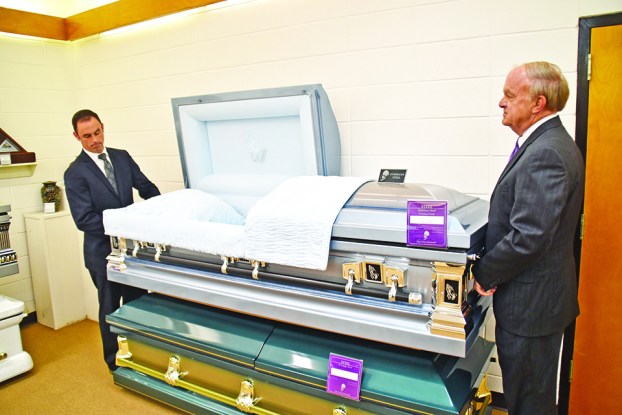 Johnson family has been in business for over 100 years

VALLEY —Johnson-Brown Service Funeral Home has been around for nearly 120 years. During that time, the funeral home has seen and implemented many changes. Johnson-Brown started out in the Langdale Community in the year 1900 and has expanded over the years. They opened a second location in Lanett in 1987 and later opened the 5-acre Memorial Gardens, which is currently expanding out to cover another 5-acres.

According to current owner Willis Awbrey Johnson, Sr., one of the biggest secrets to their success has been staying true to providing exactly what each customer wants.

“Some people want a traditional funeral while a lot of people today want to personalize,” he said. “Years ago, the deceased would be in their Sunday attire. Now it’s whatever they want to be buried in. There are a lot of college football fans out there buried in jerseys.”

Another change has been where visitations are held.

According to Johnson, the visitation used to be held primarily in the home, but nowadays it’s held at the funeral home, sometimes the family’s church.

“We offer everything,” he said. “If it’s not here, we know someone.”

Another big change is the increase in preplanning.

“It’s a positive thing,” Johnson said. “It takes a lot of the stress off the family.”

All of these changes over the years have been overseen by members of the Johnson family. It was Willis Sr.’s grandfather, George T. Johnson, alongside George Johnson’s brother, John Will Johnson, who started the business. Now his son, Willis “Will” Johnson, Jr., is the fourth generation of Johnson’s to work for the family business.

“Will’s pretty proud of that,” Willis Sr.said, noting that his family has built a good relationship with the community over the past 100 years. “It’s the trust the community has in us that has allowed us to continue.”

Know a business in need of recognition? Let us know! Email news@valleytimes-new.com.

Many unique, unusual items set to be bought

VALLEY —  There are some exceptionally nice, and most unusual, items that will be up for bids in this year’s... read more