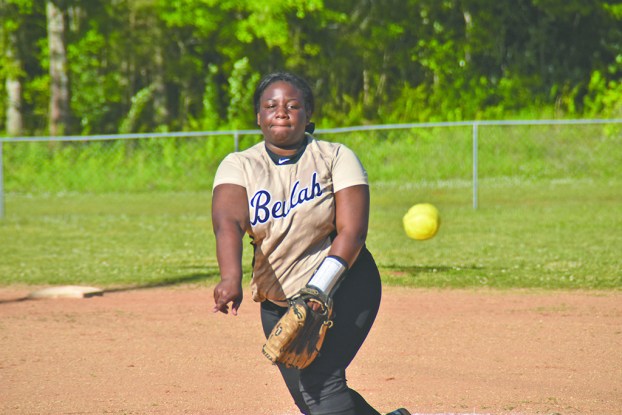 But the Lady Bobcats ended the skid in resounding fashion.

Beulah (8-5) cruised to a 15-0 victory over the Lady Bulldogs in a game shortened to three innings due to the run rule.

“It’s always a big confidence builder when you get a ‘W’ under your belt, no matter who it is your playing,” Beulah head coach Allison Aikens said. “It’s always a good morale booster for the girls.”

The Lady Bobcats lost to Class 3A, Area 6 rival Randolph County by one run last Thursday. On Monday, they suffered a 9-1 defeat at Reeltown, a top five team in 2A.

The Lady Bobcats batted through the order in a 10-run first inning that saw all nine players in the starting lineup cross home plate.

Beulah tacked on five more runs over the next two innings to solidify the outcome.

“Our hitting has been outstanding this season,” Taylor said. “It’s been the backbone of our team.”

Beulah has enjoyed a successful campaign thus far. It went 5-1 in area play and has earned hosting rights for May’s area tournament.

Prior to the hiccups against Randolph County and Reeltown, the team had not lost back-to-back games.

The Lady Bobcats’ bats have powered their ascent. Pitching has been critical, too.

Beulah had no issues in the circle against LaFayette. Huguley, the starting pitcher, gave up one hit, one walk and struck out four over three innings.

“It just gives a chance to come get back to the basics, work on the fundamentals, and just focus on what we need to focus on,” Aikens said of Tuesday’s game. “I think it’s going to help us build for the games in the next week or so.”

The Lady Bobcats will play at Valley on Wednesday. The two teams met last week, and the Lady Rams earned an 11-1 victory.

Beulah will look for a different result this time around.

LaFayette, on the other hand, is still searching for its first win of the season. The Lady Bulldogs will have a chance to secure one on Thursday when they host Loachapoka.

A few other local softball and baseball teams were in action on Monday and Tuesday. Here is a look at how each fared.

The Chambers Academy softball team closed its regular season on a high note Monday. The Lady Rebels steamrolled Coosa Valley, 19-3, to improve their record to 11-6. The team will now enjoy a break until the AISA Class A Region 1 Tournament on April 27 in Troy.

The Rebels will host a first-round playoff series on Friday.

The Springwood School softball team dropped a doubleheader on Tuesday to Macon-East Academy.

The Lady Wildcats will play Pike Liberal Arts School in their regular-season finale on Thursday.

The Lady Rams fell on Tuesday at Tallassee, 2-0, despite a clean defensive performance.

They will host Beulah on Wednesday for senior night.