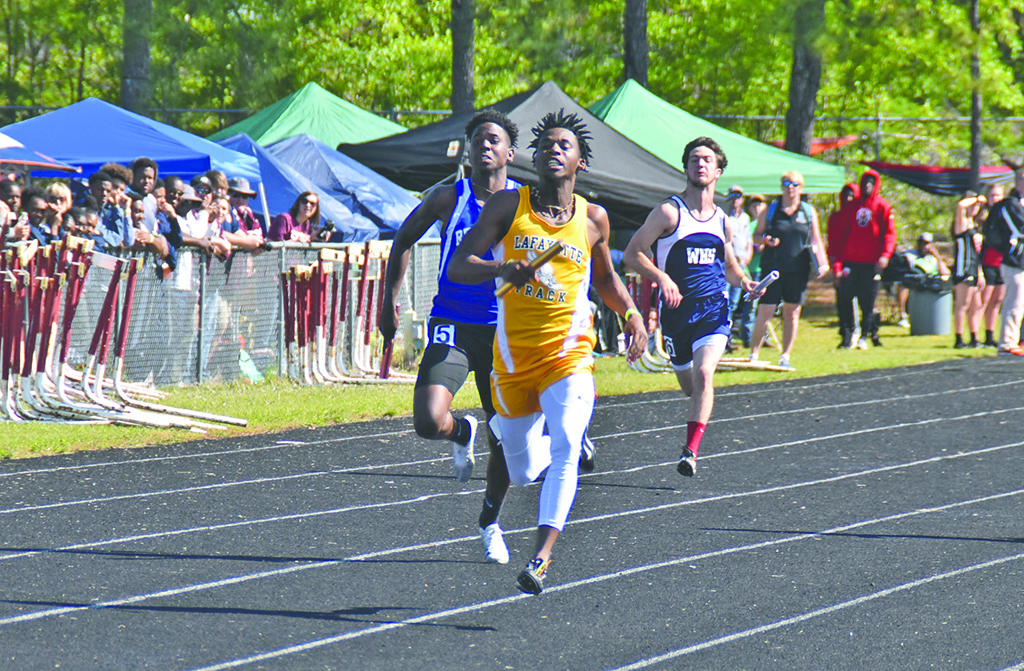 The LaFayette High School boys track and field team, helped by a victory in the 4x100-meter relay (above) won the Class 2A, Section 3 title this past weekend. (Photo by Sam Chandler)

The Lanett girls found their edge in the distance events and relays.

While the Lanett girls pulled away thanks to their strength in distance events and relays, the LaFayette boys relied on the field events and sprints en route to victory.

Overall, the Bulldogs’ top-flight showing enabled them to beat Lanett.

But the Panthers weren’t without their share of standout performances.

The top five finishers in each event qualified for the state meet, which will be held May 4-5 at Cullman High School.

A flurry of Beulah High athletes punched their tickets to the 3A state championships with their performances this past weekend at the Section 1 meet, held in Brewton.

David Fell and Antavious Moody qualified in two individual events. Fell won the 300 hurdles in 41.66 seconds and took second in the 400 in 51.65 seconds.

Isaiah Glidewell finished fifth in the shot put with a heave of 41-9.5.

The Bobcats and Lady Bobcats also qualified their 4×400 relay teams. The boys placed second in 3:33, and the girls placed fourth in 4:30.

Although they did not finish in the top five of their events, a few Beulah athletes earned wild-card berths to the state meet. Wild cards are awarded based on merit to competitors from tough sections who meet minimum time or distance standards.

The 3A state meet also will take place May 4-5 at Cullman High.

The Valley High track and field team will send a sizeable contingent of athletes to the 5A state championships, thanks to a strong showing this past weekend at the Section 2 meet, hosted by Beauregard.

Daniel Etherton and Jacquez Trammell also advanced to state in their top events.

Etherton placed second in the javelin (151-4.5); Trammell placed third in the long jump (20-5).  Notably, Trammell secured wild cards in both the high jump and triple jump as well.

Arteria Florence was the only Lady Ram to earn an automatic state spot as an individual. She took fifth in the long jump with a leap of 14-2.5. Her teammate, Whitleigh Bright, notched state berths via wild card in the 100 and 300 hurdles.