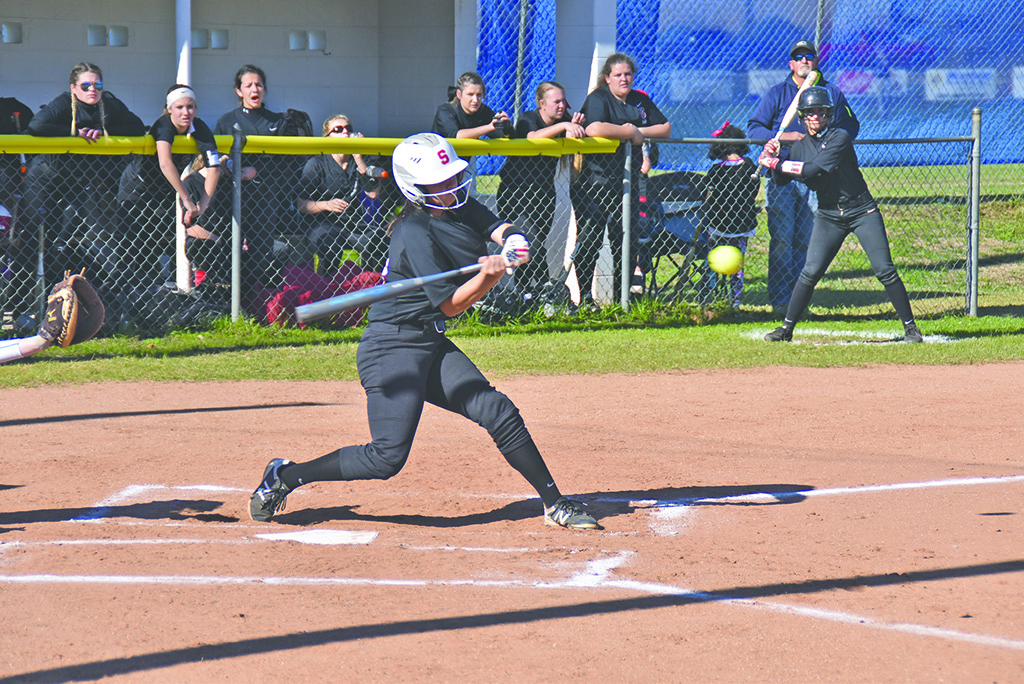 Springwood School junior Allie Davis connected for a pair of hits in both of her team’s wins against Tuscaloosa Academy on Monday. The Lady Wildcats downed their opponent 7-2 and 10-7 to qualify for state. (Photo by Sam Chandler)

LANETT — Before the season started, Galen Smith thought his Springwood School softball team had a chance to do something special.

On Monday, the Lady Wildcats proved him right.

Springwood swept Tuscaloosa Academy, 7-2 and 10-7, in the first round of the AISA Class AAA state playoffs. The wins secured the team’s spot at next week’s state tournament, which it has not qualified for in three years.

“It was a personal and a team goal,” said Smith, Springwood’s first-year head coach. “I talked to them about it when we first met in January, so here we are.”

The Lady Wildcats relied on the arm of sophomore Emma Jennings in the 7-2 win. She struck out 10 batters and allowed only three hits in a complete-game effort. It was her strongest showing since returning from an injury she sustained in the middle of the season.

“It was real encouraging,” Smith said. “She just kept on wanting to go. That’s the type of competitor she is.”

Jennings also helped lead her team at the plate. She and Allie Davis both went 2-for-3. Bailey Morrison and Rachel Remmel contributed one hit apiece. Springwood sent sophomore McKayla Barber to the circle in the 10-7 victory. She allowed six hits and recorded four strikeouts in six innings.

Jennings threw the final inning, fanning two of the four batters she faced.

The Lady Wildcats jumped out to a 6-0 lead through two innings, but Tuscaloosa Academy plated four runs in the third to cut into the lead. Tuscaloosa Academy then evened the score at 7-7 in the top of the sixth with the help of a couple Springwood errors.

The Lady Wildcats answered in the bottom half of the frame with a decisive three-run surge.

Jennings and Brady Parton both went 3-for-4 at the plate. Davis went 2-for-4 with two doubles; Maddie Johnson and Lucy Spivey each added a hit.

“They played pretty well,” Smith said of his team. “One thing I was happy to see was it looked like they had fun playing.”

With its ticket to state already punched, Springwood will compete later this week at the AAA Region 1 Tournament at Lagoon Park in Montgomery. The tournament will determine seeding for state, which will be May 4-5 at Lagoon Park.

Smith said his team will need to execute in all phases of the game to be successful.

“We have our work cut out for us, but that’s part of getting to where we are this time of year,” he said. “We’re excited about this opportunity.”