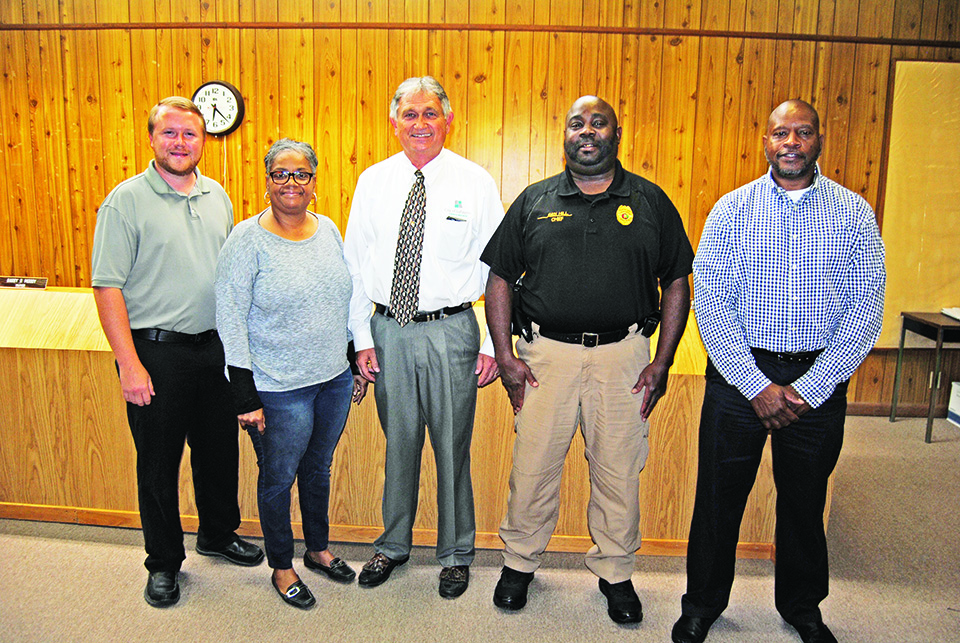 Wayne Clark | Times-News THANKS FOR A GOOD JOB: Mayor Barry Moody and members of the LaFayette City Council thanked outgoing Police Chief Ben Hill for a job well done at Monday evening’s council meeting. He’s been chief of the LaFayette Police Department for the past three yeas and with the department for more than 25 years. Shown above, from left, are Council Members Matt Hurst and Tammie Williams, Mayor Moody, Chief Hill and Council Member Toney Thomas.

LaFAYETTE — On Monday, the LaFayette City Council commended retiring Police Chief Ben Hill for his service to the city and authorized Mayor Barry Moody to name an interim chief to fill the gap before a permanent chief can be named.

Hill has been with the city’s police department for close to 26 years and has been chief for the past three years. His retirement is effective today.

“The Police Committee doesn’t have anything lined up with the chief’s position,” he said. “I make a motion for the mayor to name an interim chief.”

The motion was quickly seconded and approved unanimously. No interim has been announced

In another matter involving the police department, the council unanimously approved a USDA grant application. It’s for $50,000 and would help defray the cost of purchasing three new police vehicles. The total cost will be around $125,000. If approved, the grant would drop the city’s portion to $75,000.

The council approved the city’s participation in the July 20-22 “Back-to-School” sales tax holiday in Alabama. In participating cities and counties, there’s no local sales tax applied to school-related items over that designated weekend.

Mayor Moody and members of the council commented on the success of LaFayette Day on Saturday, April 14.

“It was a great day,” Moody said. “The weather was good, and the turnout was tremendous. Craig Brown [Valley Haven Executive Director] grew up in the local area, and his mother helped organize the first LaFayette Day. We raised more than $14,000 for Valley Haven School at this year’s LaFayette Day. That money can be matched on a four-to-one ratio with federal dollars.”

“There nothing like Mustang Sally,” he said, noting that Hurst took part in the live entertainment on stage.

“I love LaFayette Day,” Hurst said. “I enjoy coming to it every year.”

“Kudos to the Valley Haven team,” said Council Member Tammie Williams. “If was an excellent day.”

“I want to tip my hat to the LaFayette Day Committee,” said Council Member Toney Thomas. “They did a great job of organizing it. I also want to thank the LaFayette Police Department for doing a good job with security.”

According to Black, there has been a Main Street movement in the U.S. for the past 40 years. It started at a time when a growing number of downtown stores were going out of business and shuttered largely due to suburban growth.

Main Street has been a successful effort throughout the U.S.

“Over 400 communities have benefitted,” she said.

She cited Heflin and Marion as examples of towns the size of LaFayette that had benefitted through its association with Main Street.

“They have seen new businesses open,” she said. “You have a beautiful downtown area. It gives us a starting place for good things to happen.”

Council Member Hurst said he thought Main Street could work in LaFayette, provided it came at the right time.

“Is it too soon right now?” he asked. “We have some downtown buildings that are in bad shape. I can see us doing it, but the question is when.”

“From what I’ve seen you have a lot to work with,” Black said.

Chris Busby, who introduced Black to the council, said the important thing is that the community as a whole buys in to what Main Street is doing.

Main Street, Black said, is an ideal example of a public-private partnership.

The AMEA has paid the fee for its member entities to be network communities. This gives those communities the opportunity to see if Main Street is beneficial to them and if they want to take the next
step toward being a designated Main Street member city.