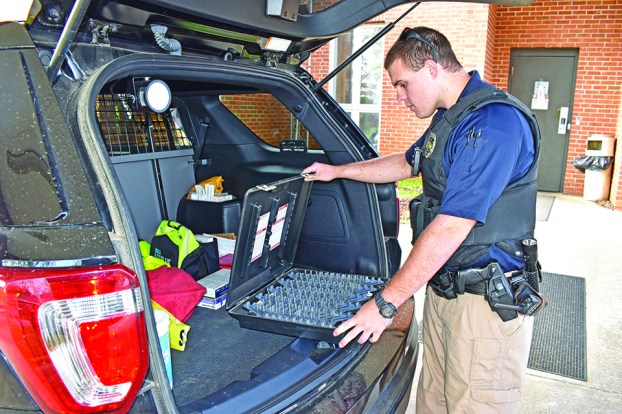 Steven Thomas | Times-News Checking the equipment: Lanett Police Officer Shawn McDevitt looks over some of his equipment before he heads out.

LANETT — People join the police department for a lot of reasons. For some it’s a chance to serve the community, for others it’s to protect the citizens.

For Shawn McDevitt, it’s a chance to better the area by removing drugs.

“I’ve been here in Lanett for two years,” he said. “I got in to help. There’s a bad drug problem and I want tot counter that.”

McDevitt said his end goal is to see a drug task force or K-9 unit set up.

While describing his plans, McDevitt expressed his love for his job, especially when he talks to people.

“When they get clean they thank you for it,” he said. “It turns their life around. Talking to these people, it’s satisfying.”

A day for McDevitt involves getting his vehicle ready and talking to the previous shift. He will usually got out and visit neighborhoods.

“We ride through high drug areas,” he said. “There’s a lot of watching. You see some kids and hand out stickers. A lot of public relations. There are good people out there.”

McDevitt added that talking to the people is an important part of the job. He noted that since starting to work with citizens, he has seen an improvement.

“Some people hate the police department,” he said. “We’re trying to change that and things have improved.”

McDevitt has enjoyed his time with the Lanett Police Department.

“It’s a great city,” he said. “I’ve seen a lot on improvement. Everything looks much better.”