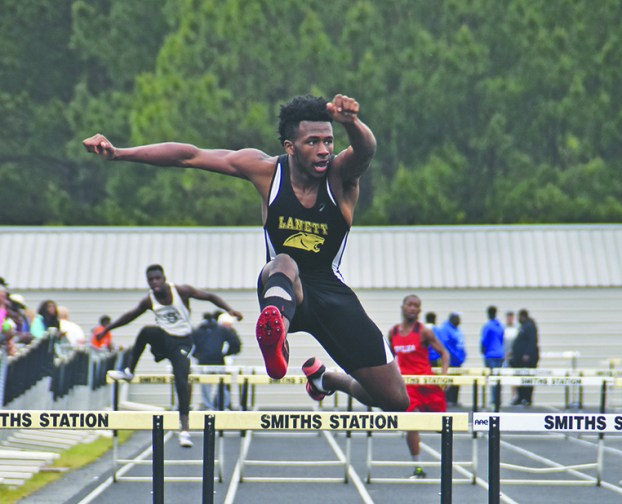 SMITHS STATION — Local track and field teams battled top-tier competition, along with soggy conditions, this past weekend at the Smiths Station Panther Invitational.

But that didn’t stop them from performing their best.

Amid rain and wind, many athletes from LaFayette, Lanett, Valley and Beulah high schools scored points in their premier events.

LaFayette, which finished fifth in the girls team rankings, had the most individual standouts.

Kendra James led the way. The senior won the 100-meter hurdles in 16.14 seconds and was followed by her freshman teammate, Feliah Greer, who took second in 18.16.

The 100 hurdles was one of four events in which Greer secured a top eight finish. She also placed fourth in the shot put, with a heave of 29 feet, 10.5 inches, and in the javelin. Her javelin throw sailed 102 feet, which bested her previous personal record by a sizeable margin.

Greer rounded out her meet with a seventh-place finish in the discus (75-4).

The Lady Bulldogs also received significant contributions from Alahbra’j Todd and Keaundra Woody. Todd, a freshman, took second in the long jump (16 feet) and sixth in the 100-meter dash (13.06 seconds). Woody, a senior, finished fourth in the long jump (15-4) and seventh in the triple jump (32-3).

“Being here running against these bigger schools helps us a lot,” LaFayette head coach Corey Thornton said. “It challenges us to put our best foot forward.”

The meet, held Friday and Saturday, featured Central-Phenix City, Auburn and Opelika, in addition to a few schools more similar in size to Class 2A LaFayette.

The Lady Bulldogs totaled 69 points across their events. Central-Phenix City placed first with 200, while Auburn placed second with 170.

No local boys team showcased the distinguished dominance of the LaFayette girls, but a few cobbled together well-rounded performances.Valley placed sixth with 35 points and was followed by seventh-place Lanett (33), eighth-place LaFayette (29) and 12th-place Beulah (10).

The Rams relied on small contributions in a number of events to reach their total. Freshman Jacquez Trammell finished sixth in the long jump (20-5.5) and eighth in the high jump (5-8); junior Daniel Etherton took seventh in the javelin (142-9), and junior Dominic Whitlow took fifth in the 110-meter hurdles (17.24).

“We had quite a few people PR today and yesterday,” Rams head coach Ronnie Hall said on Saturday. “So far this season, some of our better athletes have really put forth the effort to make sure that they’re getting everything they need out of our workouts and out of these meets.”

Lanett was led by senior Braylon Harrington, who placed fourth in the 300-meter hurdles (42.01) and anchored the Panthers’ third-place 4×400 relay. Lanett also finished sixth in the 4×800.

Senior JaMarquez Boston-Gaines highlighted LaFayette’s list of top individuals. He took third in the long jump with a leap of 21-3.5, which is the top mark in 2A.  The Bulldogs also benefited from junior Jae’lin McCurdy’s fourth-place finish in the javelin (112-9.5) and eighth-grader Antavious Woody’s fifth-place finish in the shot put (40-7). LaFayette ran the fastest time in 2A to date in the 4×100, clocking 44.76 in the preliminaries. The Bulldogs took fourth in the final behind Boston-Gaines, Azerious Brooks, Omar Boston and Fitzgerald Briskey.

“Throughout the season, we’ve been pretty consistent,” Thornton, LaFayette’s coach, said. “Each meet, week in and week out, we’ve gotten better. That’s a plus for us.”

Most local teams will return to action on Saturday at Auburn High’s Wayne Murphy Invitational. Lanett, on the other hand, will take to the track on Thursday at the Chattahoochee River Invitational in Franklin, Ga.

“We’re just looking for the next three weeks to put all the pieces together,” Panthers head coach Terrance Price said. “This week and next week we’ll be pretty much running the meets like we’ll run them at sectionals.”