Many unique, unusual items set to be bought 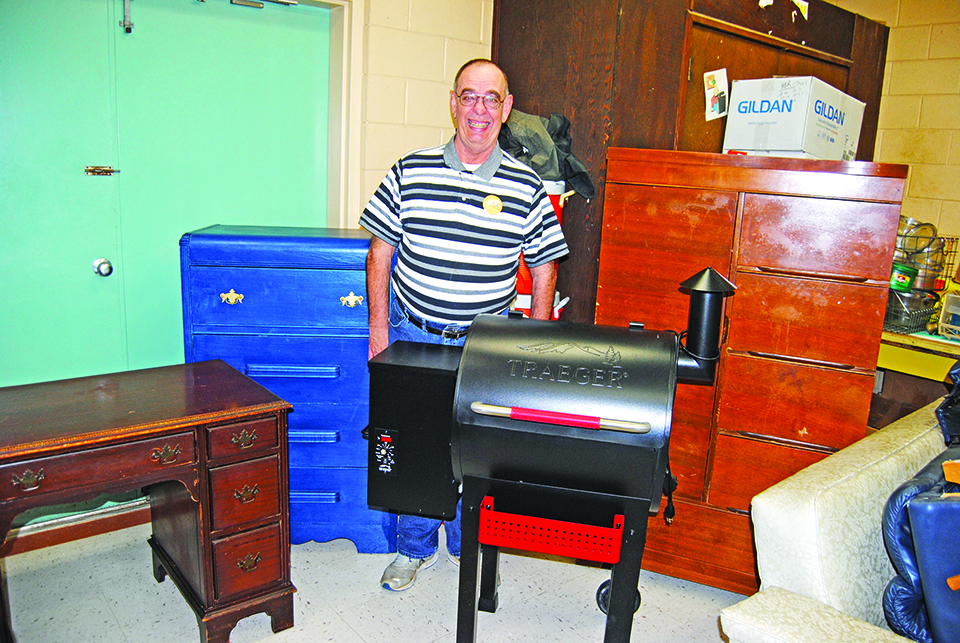 Wayne Clark | Times-News ANTIQUE ITEMS: Valley Haven client Jeff Pitts displays some antique furniture that will be up for bids in today’s auction at Valley Community Center. In front is a brand-new grill. It’s heated by wooden pellets that are burned. The annual auction will be getting under way at 5:30 p.m. The doors will open at 5 p.m. to give everyone a chance to see the items that will be bid on.

VALLEY —  There are some exceptionally nice, and most unusual, items that will be up for bids in this year’s Valley Haven Auction. This portion of the Hike/Bike/Run fundraiser has taken place for the better portion of three  decades now and is an important part of the annual event. Somewhere between $10,00o and $20,000 is usually generated by the auction. A good result this year would push the fundraising total past the half-way mark toward the $100,ooo goal.

The April 14th LaFayette Day and the annual Fun Walk by Valley Haven clients raised more than $30,000. Four trike-a-thons at elementary schools and day cares has generated another $6,000 and there’s a couple more of them to take place.

The Hike.Bike.Run Auction has a long history of having donations that are both very generous and a bit on the unusual side.

For a number of years, Cain Auto Sales in Lanett donated a car to the auction. Top-notch donations this year include a pontoon boat and a Valley Haven bus that’s being replaced. Both items in good condition.

Some of the more mem0rable items that were auctioned off include live animals. A horse, some dogs, live chickens and even an emu have gone to high bidders on Auction Day.

Some of the items in this year’s auction that you just don’t see every day are the birdhouses made by Charles Chapman. Some of them have roofs made from Chambers County tags. They’re just the thing for a Chambers County resident to have in their backyard. There’s also an apartment-style birdhouse made to look like a traffic signal. The red unit’s on top, the amber unit in the middle and the green unit on bottom. Chapman has also donated some bird feeders and a bee catcher.

“Mr. Chapman loves to do woodworking, and he’s really good at it,” Brown said. “We appreciate his support for our auction.”

Two of the donated items Brown really likes are quite old but still work reasonably well. There’s a scythe, an implement 19th century farmers used to cut wheat, and a push mower dating  to the time before gasoline engines.

There’s some antique furniture that will be up for bids.  This includes a sewing machine and a clothes closet made from cedar. There are some sofas that are in good shape and are comfortable to sit on along with a like-new grill that burns tiny wooden pellets.

“We have a lot of carpet remnants from Harris Carpets,” Brown said. “Something else that’s unusual are two massage chairs that were donated by ColorVision.”

The auction will be taking place at 5:30 p.m. EDT today at Valley Community Center. “It’s a good idea to get there at five o’clock,” Brown said. “The doors will be opening then, and you can see all the items that will be up for bids.”