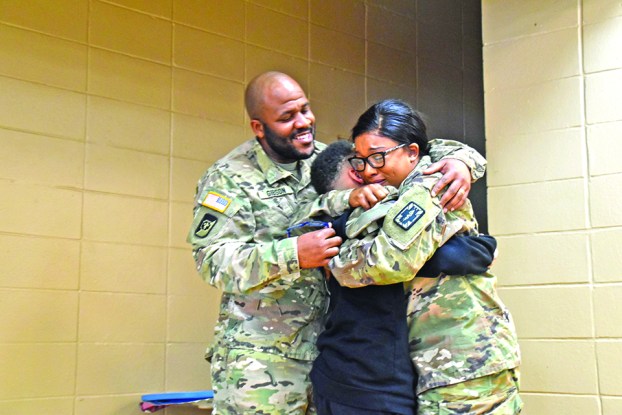 Steven Thomas | Times-News Happy moment: Gaston and Stacey Gibson happily reunite with their son, Shameer Smith, after being deployed to Kuwait for 10 months.

Parents have a surprise reunion with their son

However, one student received quite the surprise Friday as he was reunited with his parents after being separated for nearly a year.

Shameer Smith was in the lunchroom when he was asked to stand on a nearby stage. He stood there for only a moment before turning around to a momentous surprise, his mother.

Stacey Gibson and her husband, Gaston, have spent the past 10 months in the country of Kuwait as part of their deployment with U.S. Armed Forces.

“We left on June 3, 2017,” Stacey Gibson said. “We’re a vet detachment so we go and inspect the different food facilities on the bases over there. We were over there for nine months and got back at the beginning of April.”

The couple unfortunately had some minor issues to deal with upon their return before they could properly reunite with their son.

After the initial shock, Shameer and his parents happily embraced, tears flowing freely down all the family members’ cheeks.

Following the reunion, the family left the school together.

The entire affair was perpetrated by Smith’s grandmother, Paulette Morse.

“It’s very touching,” Morse said. “It’s overwhelming. I’m thankful and blessed they made it back home.”

Alongside Morse was Smith’s other grandmother, Stephanie Mitchell.

Planning took some time but once a return date was confirmed, the grandmothers worked to set everything up.

The idea for the surprise reunion was actually one of Shameer’s, who admitted he had seen similar videos on the Internet.

“It didn’t look like he was ready for that,” Gibson said. “He gasped as soon as he saw us.”

WEST POINT — Officers with the West Point Police Department are searching for a man that robbed the Lotto Store... read more