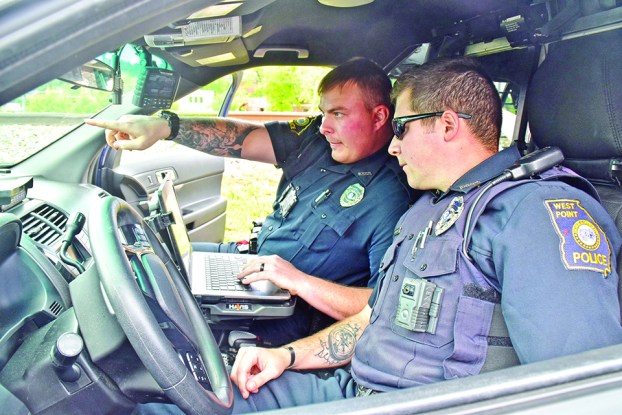 WEST POINT — Many people start a new job with the intention of doing good things. Others have a plan in place for their future. But West Point Police Officer Jayson Perez has both.

Perez, who is in his third year with the department, has enjoyed his time helping others.

“I had prior history with the Army,” he said of his years as a Cavalry scout. “I did a tour in Afghanistan and got out in 2015.”

Perez called the transition an easy one, with similar training and an added focus on community relations and paperwork.

At the moment, he is a field training officer being shadowed by officer Brandon Longshore, who started this past December.

“I’ve learned a lot [under Perez],” Longshore said. “He challenges me to know the area and what takes place.”

Perez added that his goal as a training officer is to provide those under him with the resources and confidence needed to do well in the field.

As he continues his career, Perez said he would like to work his way up the ranks.

“I would like to participate in narcotics work,” he said. “I want to have a hand in everything and eventually become a chief.”

This plan mixes well with his desire to help his fellow man.

Perez also enjoys other aspects of his work, most notably the camaraderie between officers.

“We’ll have a serious event and then we’ll step back, make a joke and then go to the next call,” he said.

Perez spends most of his days on the street and much of that time is working on officer/citizen relations.

“When I’m alone, I like to visit and talk to the people I see,” he said. “I believe it shows we’re transparent and approachable.”

Perez added that this emphasis on relations has helped.

“I’ve seen a positive impact,” he said, recalling one man that, after taking his advice, went and enrolled in college.

Outside of work, Perez spends his time with his wife, Britney, who is expecting the couple’s first child.