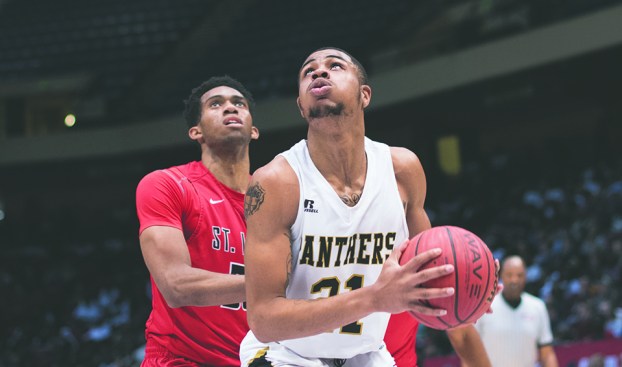 Lanett High School senior Anquaevious Pollard was named the Class 2A Player of the Year for boys basketball on Tuesday at the Alabama Sports Writers Association Player of the Year Banquet presented by ALFA Insurance. (Photo by Sam Chandler)

Pollard named 2A Player of the Year

MONTGOMERY —  The Class 2A Player of the Year finalists were introduced one by one early Tuesday afternoon.

As their names echoed across the ballroom inside the Renaissance Montgomery Hotel & Spa at the Convention Center, so too did their myriad achievements.

There was Lanett High School senior forward Emanuel Littles, the state tournament MVP, who averaged 17 points and 16 rebounds per game.

There was Mark Wilcox Jr., the unquestioned leader of a St. Luke’s Episcopal team that nearly toppled Littles’ squad in the 2A state championship game.

Then, there was Anquaevious Pollard, the reigning player of the year who averaged close to 18 points, 14 rebounds and five assists while helping carry Lanett to a third consecutive state crown.

All were worthy candidates. That’s why they were invited to the Alabama Sports Writers Association Basketball Player of the Year Banquet presented by ALFA Insurance.

But Pollard, a 6-foot-7 senior, proved a slight notch above the rest. He was named the 2A Player of the Year for a second straight season.

“It’s great, it’s very great,” said Pollard, wearing black pants and a black button-down. “Winning this back to back means I did so much in the last two years.”

Pollard averaged about 19 points and 13 rebounds in 2016-17 as Lanett surged to its second straight state championship.

His impressive numbers remained similar this winter as he helped propel the Panthers to a 26-5 record and yet another blue map.

The 6-8 Littles was frequently by his side on the court. Together, they wreaked havoc on opponents.

“It didn’t really matter who won out of me and Anquaevious,” said Littles, who sported a pink vest and coordinating bow tie. “I just knew I  wanted to keep it in the city and keep the 2A Player of the Year in Lanett. That’s what happened.”

At Lanett, the longtime friends turned a program perpetually on the brink of greatness into one defined by it.

Lanett had not won a boys basketball state championship prior to the pair’s emergence. In capturing a third this March, it became one of only 11 boys basketball teams in Alabama High School Athletic Association history to secure three state titles in a row.

“It’s just a good feeling to know you’ve done something for the people in your community and your school,” Littles said, “to be able to create history and do things that had never been done before and may never be done again.”

Pollard and Littles both will continue their careers at the next level. Pollard, also an All-State wide receiver, has signed to play football at Independence Community College in Kansas. He said he will consider joining the basketball team as well.

Littles signed with Florida Atlantic University for basketball in February but recently decommitted after a coaching change at the school.

Currently, he holds offers from the University of North Alabama, Presbyterian College and Morehouse College, along with FAU. He has until mid-May to make a decision.

“Personally, they mean the world to me,” Carter said. “They’ve been great athletes, basketball players especially. Words escape me for what they’ve accomplished and what they’ve meant to me and the entire community.”