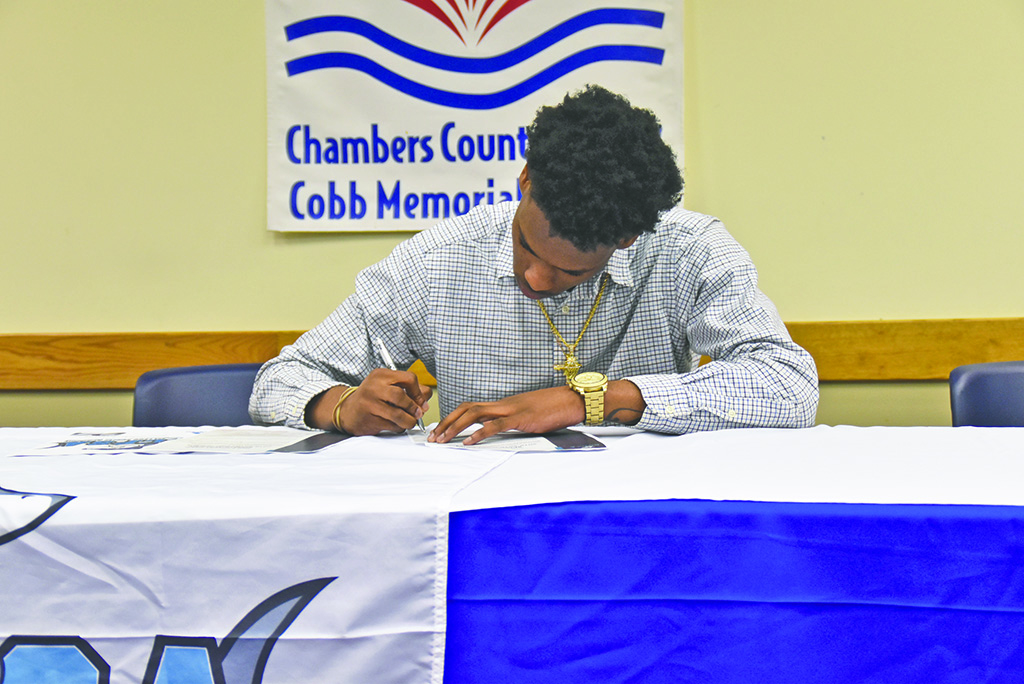 VALLEY — Kevonte’ Cooper has come a long way since being cut from the eighth-grade basketball team.

On Friday afternoon, the Valley High School senior signed a letter of intent to continue his hoops career at Gulf Coast Prep Sports Academy in Mobile.

The post-secondary institution offers players an opportunity to strengthen their academic resume and increase their recruiting exposure.

Like others who follow a similar route, Cooper hopes the one-year program will help him draw interest from larger schools.

“I had a few small offers, but I decided on Gulf Coast because I felt like I could get something bigger,” Cooper said. “After all this, I’m hoping to have a DI offer.”

Cooper signed during a ceremony held at the Bradshaw-Chambers County Library. Family, teammates and coaches all attended.

Cooper, who stands 6-foot-4, started as a forward-center for the Rams basketball team this past season. He averaged more than seven points and seven rebounds per game for a team that finished 14-12 but came up shy of a playoff berth. He was named to The Valley Times-News All-Valley Second Team for his contributions.

“He was a great player for us,” Valley head coach Marshon Harper said, “led us in rebounds, led us in blocks, and just was an exciting player on the court.”

Cooper played on Valley’s varsity team for two seasons, after spending his sophomore year on the junior varsity.

The lanky post player had been cut from the middle school team in eighth grade. Then, he missed tryouts his freshman year due to a sprained ankle.

“From day one, he was an impact player for my team,” Power said. “He was aggressive on the boards, rebounded like a madman. There was no one that could jump with him.”

Cooper identified his sophomore year as a turning point in his athletic career. He discovered that he might have a future in the game if he continued to progress.

But Cooper has opted to attend Gulf Coast Prep Sports Academy instead. He envisions a future at the Division I level, excelling at a sport that is close to his heart.

At his signing ceremony, Cooper donned a gold chain with two shiny pendants that rested on his chest. One was a cross, the other a basketball hoop.