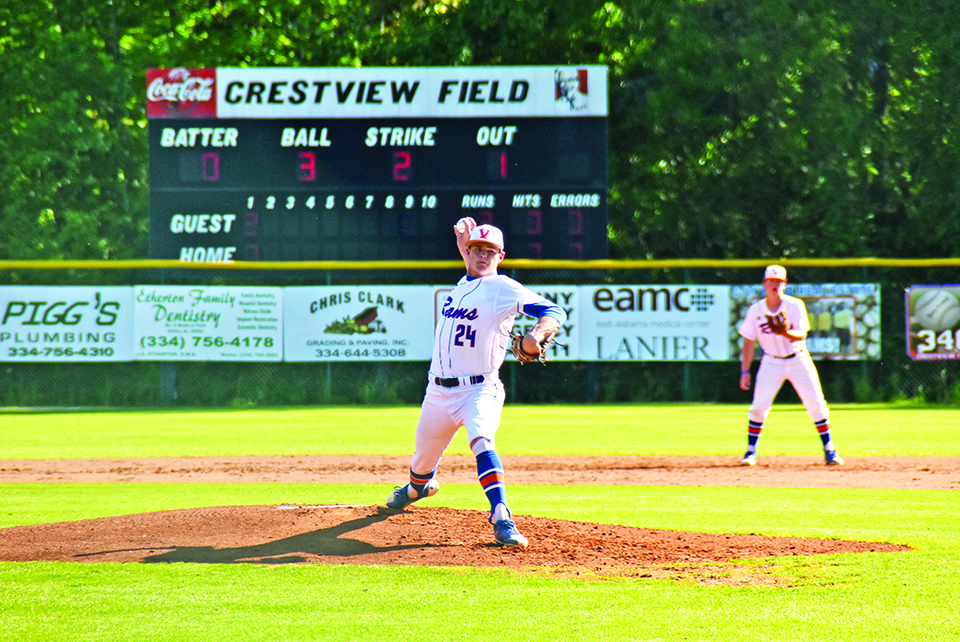 Baker Ellis | Times-News Early Pitch: Coby McDonald tosses a pitch early in Valley’s first game in the opening round of the 5A playoffs against Sylacauga on April 20.

VALLEY- After dropping the opening first-round playoff game of the evening in extra innings, a deflated Valley Rams team could not keep pace with visiting Sylacauga in the second matchup, and saw its season come to an end on Friday night.

Valley, entering the night with a 17-11 record and a 5A Area 5 championship under its belt, hosted 5A Area 8 runner-up Sylacauga, which ended the regular season ranked No. 9 in 5A. The Rams kept pace with the Aggies for most of the first game before Sylacauga scraped out a narrow series-opening win and subsequently pulled away in the second game.

The Rams fell into an early 2-0 hole in the top of the first inning, but quickly matched Sylacauga’s offensive burst with one of their own in the second. Josh Bledsoe drew a leadoff walk, which was immediately followed by a Daniel Osborne single and a Tyler Lott bunt to load the bases with no outs. Chris Conner slapped a two-run single, scoring both Bledsoe and Osborne, tying the game at two runs apiece.

Both teams settled in after the first two innings, trading small punches, but Valley’s Coby McDonald and Sylacauga’s Cody Lessley controlled the game through the fifth from the mound.

Sylacauga’s Bailey Ward broke the stalemate in the sixth, scoring after smacking a double down the left field line, pushing the Aggies slightly ahead. However, a half-inning later, Osborne stepped to the plate and mashed an offering into left-center, muscling the ball over the outfield fence to tie the game once more, 3-3.

After a tense seventh inning that saw relief pitcher Hunter Meadows pitch himself promptly into and out of a jam, the game headed to extra innings.

The free baseball did not last long, however, as Nick Mauldin, Sylacauga’s first batter in the eighth inning, pumped an offering over the left field wall, giving the Aggies a 4-3 lead. Valley could not answer in the bottom of the eighth, giving Sylacauga a 4-3 win and a one-game advantage.

“That first game was a real heartbreaker,” Valley head coach Patrick Shivers said afterwards. “That was the first time we went to extra innings all year, and we did it against the No. 9 team in the state in the first round of the playoffs. I really felt like it broke our spirits, broke our back, to drop that game like we did after we had our opportunities. It was one of those games that was hard to get over.”

The air had been taken out of the Rams sails heading into the second game, and Sylacauga took full advantage. The Aggies got on the board quickly once more in the second contest, plating three runs in the first inning. Sylacauga added another in the second before Valley starting pitcher Bledsoe was moved to third base and Lott took the mound in the third. Unfortunately for Valley, the Aggies strung together four runs, some unearned, in the inning to take a commanding 8-0 lead.

The Rams got two back in the top of the fourth, when Bledsoe scored from third on a wild pitch and Osborne, who had smacked a double moments before, scored later in the inning to bring the deficit to six, at 8-2.

Sylacauga added another run in the fourth to pad its lead, but Valley had its best opportunity of the game to cut into the deficit in the fifth, as the Rams strung together successive hits and had runners in scoring position. However, a two-out shot to left field was heaved home by Aggie left fielder Daylon Keith, and the Valley baserunner was called out in a play at the plate that could just as easily have gone the other way.

The inning ended with the Rams still trailing 9-2, and Sylacauga held serve for the remainder of the evening, winning the second game by a final of 10-2.

“We carried the momentum of the first game over into the second game and never bounced back,” Shivers said.

While the evening did not end the way the Valley faithful hoped, the season was still a success in Shivers’ mind.

“It was a tremendous year,” Shivers said. “Overall it was a great year. We finished above .500 for the first time in a long time, last year we finished 17-17. This was a great year, I’m so proud of this team and this group of seniors.”

Valley ended the season with a 17-13 record and as the 5A Area 5 champion for the second consecutive season.