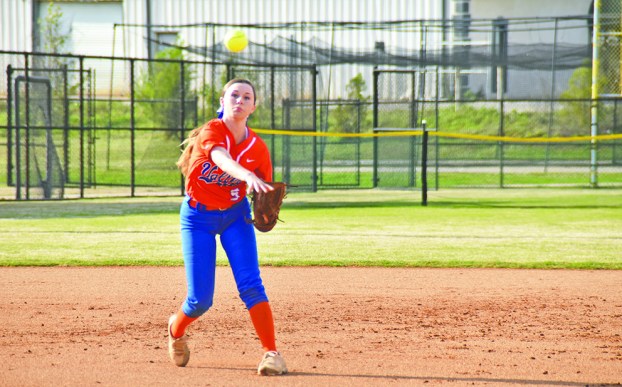 Valley High School junior shortstop Gracie Landis contributed at the plate and in the field in the Lady Rams’ games against Opelika and Randolph County earlier this week. (Times-News file photo)

The Lady Rams nipped Opelika on Monday, 2-1, before falling short at Randolph County on Tuesday, 6-5.

Valley starting pitcher KK Green set the tone in the circle, allowing only three hits and striking out six in a complete-game effort.

The freshman outdueled Opelika’s Makia Gagliano, who allowed one hit and struck out three.

Valley plated its two runs in the first inning. Faith Graben laced a ground ball to the left side of the infield and reached base on an error that allowed Julisia Trammell and Pacey Duck to score.

Opelika pushed across its lone run in the following frame, but was held in check over the final five innings. Green retired the side in three of them.

Gracie Landis accounted for the Lady Rams only hit in the contest. She notched a double in the third inning.

Valley had a more prolific showing at the plate against Randolph County, but it could not hold pace with the Lady Tigers.

The home team broke a 5-5 stalemate in the sixth inning to claim a lead it didn’t relinquish.

Again, Green started in the circle. She surrendered eight hits and struck out three.

Randolph County held a 5-1 lead through three innings, but Valley battled back to tie it at 5-5 in the fourth.

Valley and Randolph County remained deadlocked, 5-5, until the bottom of the sixth inning. The Lady Tigers notched the decisive run on an RBI single off the bat of Katelyn Neal.

Valley had a chance to tie the game in the top of the seventh, which Kolbie Frailey started with a double. But three ensuing Lady Rams batters all recorded outs, leaving Frailey stranded to end the game.

Valley will look to rebound from the loss on Friday at the Woodland Round Robin Tournament. Then, it will turn its attention to next week’s Class 5A, Area 5 tournament at Beauregard.

The Lady Rams will play Booker T. Washington on Tuesday in the first round. If they win, they will face Beauregard later in the day.

LANETT — Before the season started, Galen Smith thought his Springwood School softball team had a chance to do something... read more