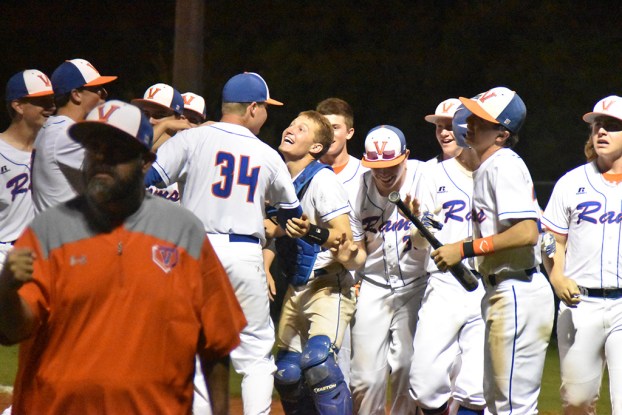 The Valley High School baseball team swept Beauregard in a doubleheader on Thursday to secure the Class 5A, Area 5 title for a second consecutive season. (Photo by Sam Chandler)

On Thursday, the Rams swept Class 5A, Area 5 foe Beauregard in a high-stakes doubleheader at Crestview Field. Behind clutch performances from senior pitchers Josh Bledsoe and Tyler Lott, Valley dismissed Beauregard 8-3 and 10-1.

Valley dropped its first meeting at Beauregard on Tuesday, 4-1. But the Rams didn’t seem to be affected by the pressure at home.

“To have our backs against the wall like we did and come out here in front of the home crowd and get two wins, that’s huge,” Rams head coach Patrick Shivers said. “It doesn’t get any bigger than this around here.”

According to Shivers, the Valley baseball program has not won back-to-back area titles in more than two decades.

Bledsoe and Lott carried the Rams (16-11) to the historic achievement.

Bledsoe took command in the opening game on Thursday evening, allowing four hits and recording five strikeouts over seven innings. Only one of the three runs he surrendered was earned.

The Rams broke a 1-1 stalemate in the third inning when Steven Coker scored on a passed ball and Bledsoe punched a two RBI single to right field with two outs.

It was one of many timely hits the Rams delivered.

“It was there both games,” Shivers said. “It felt like every time we had two outs with runners in scoring position we got a base hit. That’s what it came down to.”

Valley tacked on four more runs in the fourth inning on drives by Chris Conner, Eli Culpepper and Andrue Davis. The Rams led 8-3 entering the fifth, which was plenty of support for Bledsoe. He faced the minimum number of batters over the final three innings.

Valley parlayed its momentum into the series-deciding nightcap. The Rams plated four runs in the first inning on a pair of passed balls and RBIs off the bats of Lott and Conner.

Lott took it from there. He surrendered just four hits and recorded seven strikeouts over seven innings. The only time he ran into trouble was in the top of the third. He escaped a bases-loaded jam by throwing a two-strike breaking ball. A frozen Beauregard batter watched as it caught the corner of the plate.

Beauregard scored one run in the fifth inning to cut into Valley’s advantage. But Daniel Osborne delivered the dagger with a monstrous sixth-inning grand slam that sailed over the left field fence. Its destination, like the game’s outcome, was never in doubt.

“That’s what it’s all about,” Shivers said.

The area-clinching victory also locked up home-field advantage for the first round of the state playoffs, which begin next week.