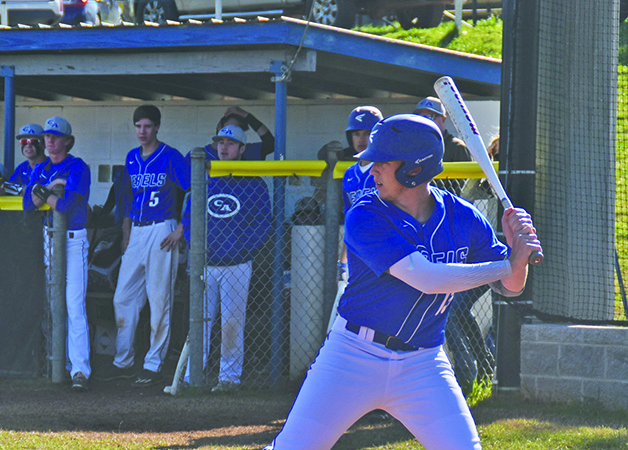 LaFAYETTE — The Chambers Academy baseball team swept Sparta Academy in the first round of the AISA Class A state playoffs last week.

The wins secured their spot in the second round of the playoffs.

“I feel like we’re getting hot right now,” Chambers Academy head coach Dillon NesSmith said. “It’s fun to be a part of this.”

Both games against Sparta Academy were shortened to five innings due to the run rule, which comes into effect when a team leads by 10 or more runs.

But Sparta Academy showed signs of life early in the first contest, taking a 3-0 lead in the top of the first inning.

Chambers Academy countered, however, in the bottom half of the frame. The Rebels tied the score at 3-3 before pulling away over the next four innings.

Starting pitcher Luke Davis settled down after an inauspicious start and didn’t allow another run.

Davis, Braxton Allen and Blake Sheppard all went for 3-for-3 at the plate. Together, they drove in nine of their team’s 13 runs.

“If we keep swinging the bats like we are, we’re a tough team to beat,” NesSmith said.

Chambers Academy continued to flex its muscle in the second game. Starting pitcher Gavin White took care of business on the mound. Allen, a sophomore, went 3-for-4 with four RBIs.

The Rebels will aim to replicate their stellar performances in the second round. On Thursday, they will travel to Cornerstone Christian in Columbiana for a best-of-three series.

Chambers Academy has already played Cornerstone Christian three times this season. The Rebels prevailed in two of the three meetings.

If they can find similar success this week, they will advance to the state semifinals for the first time since 1999.

“We’ve got to stay humble,” NesSmith said. “We’re excited, but we haven’t done anything yet.”

The Springwood School baseball team saw its season come to an end Friday in the first round of the AISA Class AAA state playoffs.

The Wildcats lost to Edgewood Academy, 11-1 and 7-0. Dylan Anderson recorded his team’s lone RBI.  Springwood was held to two hits in the second game.