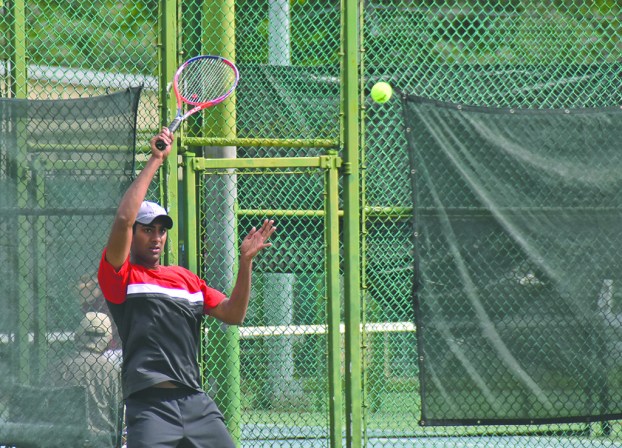 MONTGOMERY — Ananth Reddy and Wyatt Albertson arrived at the Lagoon Park Tennis Center on Tuesday morning with only minutes to spare before their state championship matches.

As a result, the Springwood School seniors were forced to skip most of their warm-up routines. But it didn’t matter.

Unrattled, Reddy and Albertson maintained composure ahead of the biggest matches in their prep careers. Their poise enabled them to thrive.

The Springwood duo captured state titles at the No. 1 and No.  2 singles positions as they cruised past their competition at the Alabama Independent School Association State Tennis Tournament.

Minutes after Albertson secured his victory — and moments after Reddy clinched his — the two embraced across the waist-high fence surrounding center court. Both flashed wide smiles as they shared a breakthrough that was years in the making.

“It’s probably the biggest accomplishment — I don’t want to say of my life —  but it’s up there, definitely,” Reddy said. “Basically my whole tennis career has been for this one moment.”

Now, he has two he can look back on.

A couple hours after their singles triumphs, Reddy and Albertson, teammates since middle school, marched to the state championship at the top doubles position, 2-0 (6-2, 6-3).

The victory avenged a loss the tandem suffered in last spring’s state final.

But redemption was the name of the game on a cool, breezy Tuesday.

Neither Reddy nor Albertson had won a state crown prior to this year’s tournament. Both had come tantalizingly close.

Reddy lost in his two previous state singles finals, and Albertson lost in his one final. This time, they flipped the script in resounding fashion.

“It’s really meaningful,” Albertson said. “I just wanted to come out here and have a good time. As long as I played well, I didn’t really care whether I won the whole thing or lost in the first round.”

When he stepped on the court, however, Albertson left nothing to chance. He didn’t drop a single game in his quarterfinal and semifinal singles matches, blanking his opponents by identical scores, 2-0 (6-0, 6-0).

Albertson encountered a tougher matchup in Tuesday’s final. He lost four of the first seven games before roaring back to win six straight and take control.

Albertson finished a number of points at the net, including one that exemplified the tenacity that head coach Tony Oswald raves about.

In the final set, Albertson chased down a lob shot that sailed over his head. He then delivered an off-balance forehand that sent him sliding into the back fence.

He proceeded to hop up quickly, continue the rally, and win the point with a decisive volley.

He punctuated the breathtaking sequence by pumping his fist and yelling, “Let’s go!”

Less than 10 minutes later, Reddy celebrated his match victory in the same manner Albertson celebrated his pivotal point: with a fist pump and a “Let’s go!”

It was one of the only expressions Reddy made all match. Otherwise, he let his racquet do the talking.

The 6-foot-4 right-hander combined power and precision in an all-around masterful performance.

He whistled forehand shots only inches above the net, showcased an efficient one-handed backhand and overwhelmed with his serve.

Like Albertson, Reddy routed his way to the final. He won 24 of 25 games in a pair of 2-0 victories in the quarterfinal and semifinal rounds.

“Basically, all of the people that used to play tennis for Springwood in my past seven years, this is for them,” Reddy said, “because I know how much a state title would mean to them.”

The dominance of Reddy and Albertson helped the Springwood boys secure a third-place finish for the seventh consecutive year.

Each top three finish has come under the guidance of Oswald, who helped revive the program when he took over as coach in 2012.

This was his last state tournament at Springwood.

Later this month, he will move to Austell, Ga., to become the tennis director at Sweetwater Tennis Center.

Tuesday’s state victories were the first of his tenure.

“It’s been a long seven-year journey,” Oswald said, “and I know they’re as satisfied as I am.

Pollard named 2A Player of the Year

MONTGOMERY —  The Class 2A Player of the Year finalists were introduced one by one early Tuesday afternoon. As their... read more