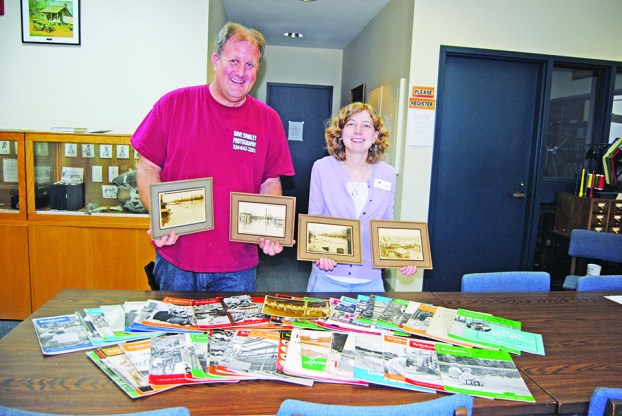 Wayne Clark | Times-News A DONATION FOR THE ARCHIVES: On Friday, local professional photographer Dave Shirley donated the above items to Cobb Memorial Archives. Included is a nearly complete collection of The Westpointer plus other West Point Manufacturing Company publications such as “Living and Working in the Valley” and magazines about the Cotton Festival parades of the 1940s. ABOVE: Dave and Cobb archivist Robin Brown display some matted photos of local floods in the 1920s.

He found them while cleaning out his grandparents’ home  in Lanett. Included is a nearly-complete collection of The Westpointer magazine, which dates from the mid 1950s to the early 1960s.

Both were taken in Lanett. One shows the dock of the Lanett Depot and flood water coming across the Reed Pecan Grove and over the A&WP Railroad. The other is taken from a hillside and shows the west bank of West Point completely flooded and water coming up a hill in the historic Bluffton section of Lanett.

Another photo from the 1920s donated by Shirley shows workers in a spinning room at Lanett Mill.

“I’d never seen photos like them before,” said Shirley. “I knew they had to be from a flood in West Point. One of them had the date 1925.”

They had to have been taken after 1922-23. That’s when the Lanett Depot was built.

One of the iconic photos of early Lanett was taken in downtown Lanett in 1920. Shown is a row of cars lined up in front of the 1906 Fraternal Hall & Stores Building which still stands. Participants called it the Depot Convoy. Each car had a different banner. One reads “We travel out of Alabama.” The next one says: “For everything we get.” The next one: “That why we need a Depot” and finally: “In the City of Lanett.”

The civic drive was successful. A depot was built and lasted until the early 1990s.

Dave’s grandparents, Thomas and  Hazel Mitchem, lived on the north side of Lanett and collected some interesting items over the years. Obviously, the goings on with the West Point Manufacturing Company, as  chronicled in The Westpointer, was important to them as were the floods of the Chattahoochee. Mr. Mitchem worked for Meadow Gold. “I can remember being a child at Springwood School and him delivering the milk,” Dave said. “If he would see me he would give me a free one. That always made me feel good.”

Floods in downtown West Point were once a relatively common event. According to records kept by the Interstate Telephone Company, there was a total of 75 floods in downtown West Point from 1900 through 1975, when West Point Dam was completed and the lake impounded. Since then there’s been only one flood, in May 2003. The worst floods took place in  1886 and 1919. The worst year for flooding was in 1929, when the downtown area was flooded on three consecutive Fridays in the month of March.

LANETT — Todd Smallwood is retiring from the Lanett Electrical Department after a career that spanned the better part of... read more