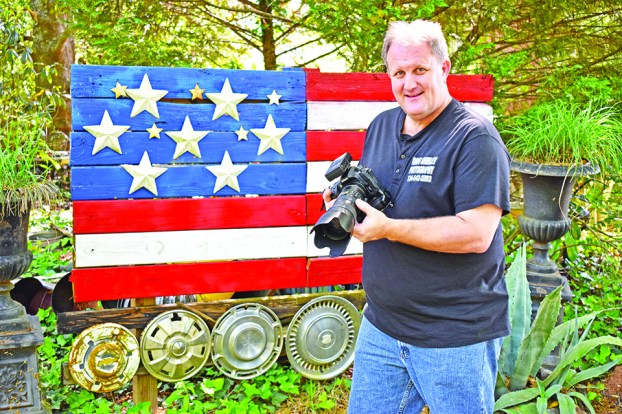 Steven thomas | Times-News Studio shots: Photographer Dave Shirley has an extensive studio featuring a variety of indoor and outdoor spots to take pictures for his clients.

LANETT — Not many people can say they started their own business while still in school and then proceeded to keep that business open for nearly 30 years, but Dave Shirley can.

Shirley, who runs Dave Shirley Photography in Lanett with his wife Lisa, is overjoyed at his success.

His story starts back in 1989 when he opened his own studio while still a photography student at North Georgia Tech. He graduated with honors in 1991.

“My mother and father saw this house for sale,” he said of the building housing his current studio. “We bought it a few days later.”

Shirley’s mother, Josephine, was an integral part of the operation and gave her son much support prior to her passing on Sept. 1, 2017.

The house is a full-time studio and Shirley takes all his work by appointment.

Since opening, much has changed for the photographer and his studio: the fall of film and the rise of digital files, the demand for immediacy and the loss of the dark room as a necessary part of film development are some examples.

When asked if he ever uses physical film, Shirley replied, “I’m totally digital. You have to be.”

Shirley added that one of the reasons for his success is that there is a style to his work.

“It’s having a personal touch,” he said.

Another claim to fame for Shirley is the extensive number of sets available at his studio. This not only includes indoor areas, but a plethora of outdoor venues as well, including railroad tracks, a beach and what Shirley calls “ruins.”

These sets are built using a variety of material, many of which are salvaged from old structures around the Greater Valley Area and beyond.

“I have been given access to a lot of areas,” Shirley said, recalling a time he was teaching a class and was asked where he got his materials. “I took them to a salvage yard and they left with truckloads of materials.”

Currently, he has over 30 sets built on the property, located inside the city of Lanett.

The most popular is the old truck.

“It’s unique and hard to find,” he said. “I have so many sets that I sometimes have to chase some people off looking to use them. I put a lot of blood and sweat into this studio.”

“Business has been good because people still want prints,” he said.