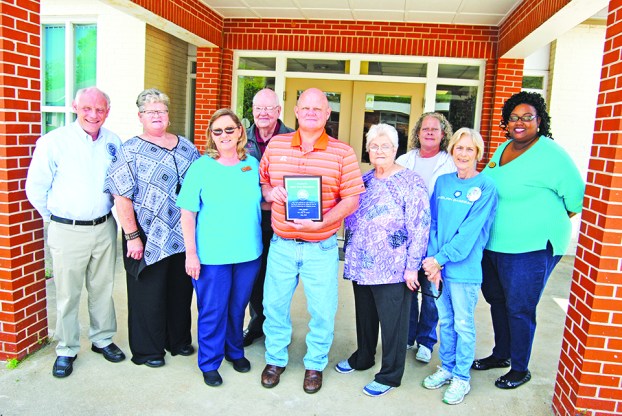 Wayne Clark | Times-News LANETT RETIREMENT: Todd Smallwood (at center) was honored with a retirement luncheon Friday during the noon hour at the Jane Farrar Event Center. Smallwood had been employed by the City of Lanett since Sept. 16, 1996 and had worked in the water, gas and electrical departments. “I’ve really enjoyed working for the city,” he said. “The city has been good to me and my family, and I appreciate that.” Shown above, from left, are Mayor Kyle McCoy; Todd’s sister, Tammy Smallwood; his wife Lisa; Bobby Williams, former Lanett city manager; Todd Smallwood; his mother, Mary Smallwood; his sister, Lauren Miller, and council members Shirley Motley and Angelia Thomas.

LANETT — Todd Smallwood is retiring from the Lanett Electrical Department after a career that spanned the better part of 22 years.

“I started out in the water department, then I went to the gas department and now I’m in the electrical department,” he said. “I’ve been with the city since Sept. 16, 1996.”

“I’ve really loved working for the city, and I know I’m going to miss it,” he said during a retirement luncheon held in his honor on Friday.

He beat colon cancer 15 years ago and has been cancer-free since 2003.

Smallwood is well known for playing the role of Santa Claus.

“I did it for more than 30 years,” he said. “Last year was the first time I didn’t do it. I’ve been in lots of Christmas parades, at the Merry go Round and at the Christmas programs we’ve had in downtown Lanett.”

Mayor Kyle McCoy told a noon-hour gathering at the Jane Farrar Event Center that Smallwood is the kind of guy you can always count on.

“If you ever needed something done in a hurry and you called on him he would do it,” he said. “We are here today to honor Todd Smallwood for his many years of dedicated service to the city.”

Smallwood said he knew he was going to miss the people he worked with.

“That the hardest part,” he said, “but I am looking forward to retirement.”

Smallwood was joined at the reception by his mother, Mary; wife, Lisa; and his two sisters, Tammy Smallwood and Lauren Miles.

Todd and Lisa have two school-age children, Aiden and Brantley. Lisa is a cashier for the city.

The mayor couldn’t resist taking a lighthearted jab at him, giving him a photo of Redd Foxx in the role of Fred G. Sanford of the 1970s TV show “Sanford and Son.”

“Just don’t take that  Sanford & Son logo off the side of that truck,” the mayor joked.

“Yep. I guess he’s my hero,” Smallwood joked back.