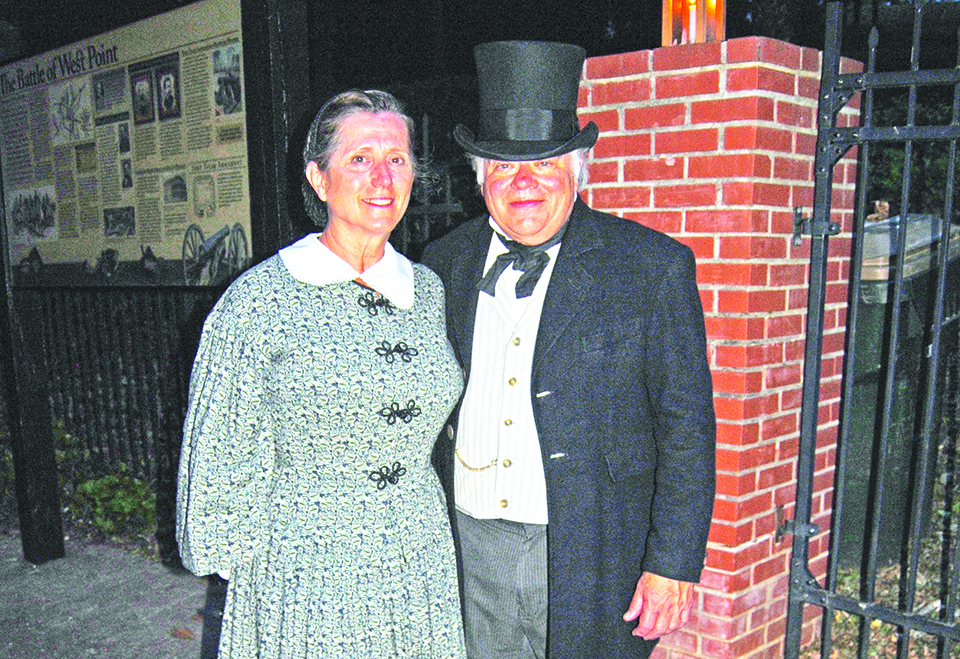 Wayne Clark | Times-News LIVING HISTORY COUPLE: Joe and Debbie Thompson are well versed on the history of the local area and the Georgia-Alabama region. On Saturday, they played the parts of people of the Civil War era and served as tour guides for the annual Fort Tyler commemorative program. Monday was the 153rd anniversary of the Battle of West Point and the fall of Fort Tyler.

WEST POINT — Joe and Debbie Thompson are good neighbors, not just to people in West Point and the Valley area, but to folks throughout Georgia and Alabama.

They are retired, but remain very active in educating people about the region’s past in living history events.

Joe is the son of Harvey Thompson, a former police chief in West Point. Debbie grew up north of town, not far from the present-day location of West Point Dam.

“We met in the basement 0f the West Point First Baptist Church,” recalls Debbie. “Somehow we got to talking about history, and I told him I was working on a history project for school. He offered to help me and showed up at my house the next day with a stack of books that must have been two feet tall. He told me that those books should help me, and they did.”

Joe and Debbie have maintained a keen interest in local and regional history throughout their lives. Debbie had a lifelong love of horses and has taught riding and horsemanship skills for many years.

“That’s 42 years ago now,’’ said Debbie. “It seems like yesterday that we got married.”

After graduating from West Point High, Joe earned a degree in history with a minor in education from LaGrange College in the mid 1970s. He had a long career in the Georgia Department of Natural Resources, State Parks and Historic Sites division. He was the superintendent at the Sunbury and Wormsloe historic sites south of Savannah.

Both sites date to the eighteenth century. Sunbury was a fortified area in the Revolutionary War, the War of 1812 and the Civil War. Wormsloe is a tabby-fortified house that was built in 1730.

Joe retired from the state of Georgia and the Georgia Peace Officers Association after 32 years of service. The couple then returned to West Point to live and have been very active in the community.

“Joe loves to do anything that relates to history,” said Debbie. “He’s been involved at the events at Fort Tyler, at Horseshoe Band and at the National Infantry Museum in Columbus.”

Debbie has combined a love of history and sewing to make 18th and 19th century clothing for museums and living history programs. She also works with Middle Creek Farms in teaching riding skills.

She loves to tell the story of one of her ancestors who wanted to take part in the defense of Fort Tyler. He was a favorite of the fort’s commander, General Robert C. Tyler, who gave him an honorary rank in the army.

On the day of the battle, the young soldier wanted to be at the fort, but the general assigned him the duty of scouting for Union troops approaching the fort several miles to the north.

Of course, the general knew that federal cavalry was coming to West Point from the southwest and was trying to keep the young boy out of harm’s way.

Know a neighbor in need of recognition? Let us know! Email news@valleytimes-news.com.