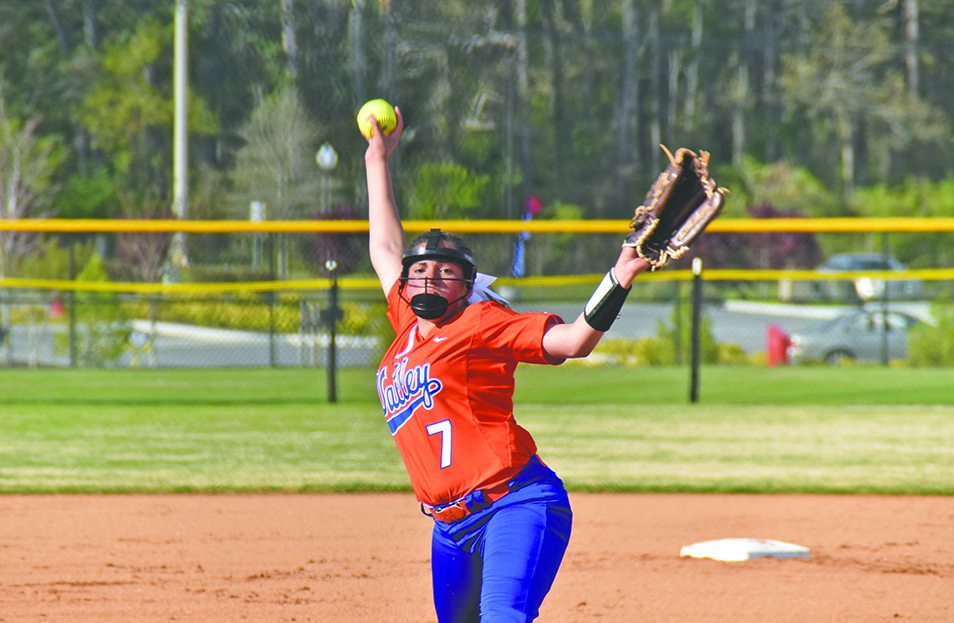 So far, the Lady Rams are proving her right. They beat Beulah on Monday, 11-1, and Woodland on Tuesday, 7-1.

Notably, Valley did not commit a single error in the contest, which was shortened to five innings due to the run rule.

But the Lady Rams, who will look to extend their win streak on Thursday against Russell County, were not the only local team in action the first half of the week. Here is a rundown of how other Greater Valley Area softball and baseball programs fared.

The Beulah High School softball team rebounded from Monday’s 11-1 loss to Valley with a dominant victory over 3A, Area 6 opponent B.B. Comer on Tuesday.

Pitchers Kensley Kirby and Eriona Huguley allowed only three hits in a game that was shortened to four innings due to the run rule.

Beulah scored two runs in the first inning and 11 in the second to put the game out of reach.

The Beulah baseball team, on the other hand, couldn’t rebound from Monday’s 3-1 loss to Horseshoe Bend. The Bobcats fell on Tuesday to area opponent Randolph County, 10-1.

The defeat dropped Beulah (13-14) to 3-4 in the area and essentially eliminated it from playoff contention. Nevertheless, head coach David Russell said his team will compete hard on Thursday when it hosts Randolph County in a doubleheader.

The Chambers Academy softball and baseball teams made the most of their Tuesday trips to Prattville. The Lady Rebels and Rebels both swept East Memorial Christian Academy in a pair of doubleheaders.

The Lady Rebels’ victory clinched their third consecutive area championship. Chloe Mitcham and McKensie Barnes posted a pair of stellar pitching performances in helping their team improve to 10-5 on the season. The resounding triumphs halted a four-game losing streak.

The Chambers Academy baseball team improved to 9-11. Both squads will return to action on Friday when they host Lee-Scott Academy.

The LaFayette High School softball team dropped a 22-2 decision to 2A, Area 8 opponent Reeltown on Monday as it fell to 0-5 on the season. But head coach Jessica Brewer said she was proud of her players for scoring a couple runs. The Lady Bulldogs were held scoreless in their first meeting with Reeltown.

Hunter Ames entered the 2018 baseball season with a list of goals for the Lanett High School baseball team.

Chief among them was knocking off 2A, Area 8 rival LaFayette, a squad it had not beaten in Ames’ three years with the Panthers’ program.

Spurred by an all-around team effort, the Panthers earned a 14-12 victory at LaFayette. Lanett plated seven runs in the first inning to take a commanding lead before holding off a late Bulldogs’ surge.

Kristian Story secured the win, and Larontavious Houston secured the save. Story, a sophomore, posted eight strikeouts in 5 1/3 innings on the mound. Houston, a freshman, came on in relief and sealed the deal.

Christian Sparks and Shon Meadows contributed to the offensive production as well. Sparks, who shined at catcher, went 3-for-5 with four runs scored and four stolen bases.

Meadows went 2-for-3 with three walks.

Story and Sparks also were involved in a critical sixth-inning double play. Khalil Cunningham corralled a deep fly ball in left field before relaying the ball to Story at shortstop. Story then fired a throw to Sparks, who tagged out a runner at home plate.

Ames said the sequence provided his team with a decisive momentum boost. Lanett (3-10) will host LaFayette, which is winless, in a rematch on Friday.

The Springwood School softball team was blanked on Tuesday in a doubleheader at Glenwood School.

The Wildcats baseball team didn’t fare any better at Glenwood. The Gators, ranked second in the most recent AISA state poll, defeated Springwood 11-1 and 14-0.

Glenwood’s Nick Adams threw a no-hitter and recorded 10 strikeouts in the second game.

Springwood fell to 7-15 with the defeats.

The Valley baseball team suffered a 4-1 setback on Tuesday at 5A, Area 5 opponent Beauregard. The defeat gave the Hornets a one-game advantage in the chase for an area title.

The Rams (14-11) will have to sweep Thursday’s home doubleheader if they want to capture the area crown for a second consecutive year.

Starting pitcher Coby McDonald allowed only four hits in Tuesday’s loss. But three of them came with runners on base.

Valley totaled five hits and left seven runners stranded. Rams head coach Patrick Shivers identified his team’s inability to push them across the plate as the difference in the game.

Steven Coker (1-for-3) had Valley’s lone RBI on a fourth-inning single.