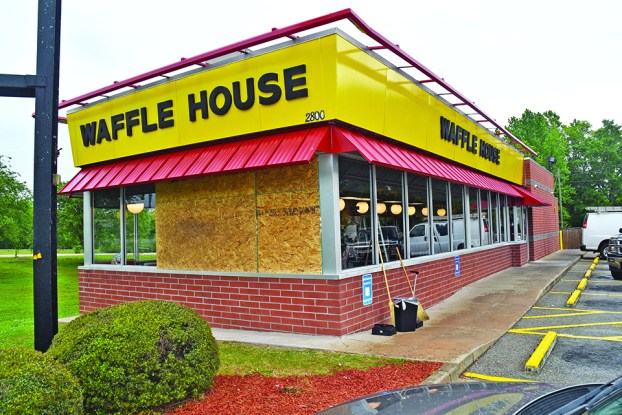 Boarded up windows cover up the damage done during a late-night drive-by shooting at a local Waffle House.

VALLEY — Law enforcement is on the lookout for the suspects involved in a late-night shooting at a local Waffle House.

According to Major Mike Reynolds with the Valley Police Department, at approximately 11:30 p.m. Wednesday night, officers received a call of shots fired at the restaurant located at 2800 20th Avenue in Valley.

Once there, officers met with the four employees who were present at the time of the incident.

They reported that an unknown person fired seven to 10 shots from a dark-colored car as it passed by.

“It was a drive-by shooting,” Reynolds said, noting the vehicle was seen heading north on I-85.

No customers were in the restaurant at the time of the shooting and none of the employees were injured. Three of the plate glass windows at the business were shot out.

Pat Warner, director of public relations and external affairs for Waffle House, had this to say, “We are very thankful that no one was injured in the incident this morning at our Valley, Ala., restaurant. Our primary concern is always for the safety of our customers and associates. We are cooperating with police in their investigation and defer all questions about the details to them.”

The case has been turned over to the investigations division, but Reynolds noted that they are working under the idea that the shooting is related to two other shooting incidents that occurred in LaFayette in recent weeks.

“We believe this incident was related [to previous shootings],” Reynolds said, noting one of the employees was the probable target. “It’s what we believe.”

He added that at this time no names of possible suspects have been released.

“We do have some possible names, but we need to verify before going public,” Reynolds said.

Anyone with information concerning the identity of the suspects is encouraged to call the Valley Police Department at 334-756-5200 or the Valley Crime Stoppers at 334-756-8200.

City honors ‘I Want to be Mayor’ essay winners