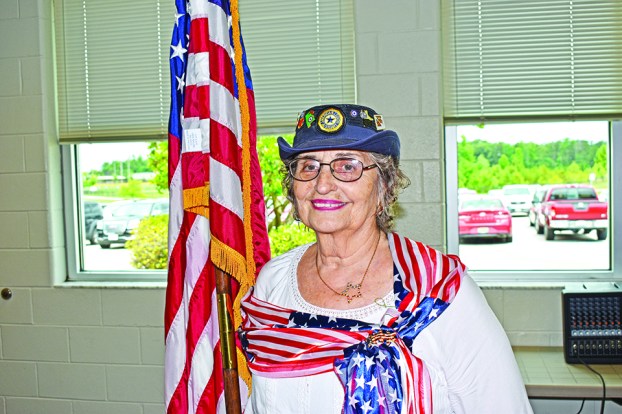 GOOD NEIGHBOR: Nita Abney is president of Auxiliary Unit 67, a support group for veterans in the American Legion

Abney serves those who served

VALLEY — The Valley Community Center was full of veterans from all branches of the United States Armed Forces on Monday, all gathered in remembrance of fallen servicemen.

It was Memorial Day, and after an opening prayer and remarks from Post Commander Lanny Bledsoe, a woman sporting a scarf with the nation’s stars and stripes stood at the lectern to read a poem by John McCrae titled “In Flanders Fields.”

The woman was Nita Abney. She was invited to speak Monday morning because of her role in the Auxiliary Unit 67. Abney is the president of the Auxiliary, a support group that works alongside the American Legion Unit 67 by holding events and raising funds.

“We help the veterans in any way we can if we know of something that they need,” Abney said. “We participate in yard sales for the veterans over at Bill Nichols [Veterans Home]. We hope to get over to help out the Auxiliary in Tuskegee whenever they have programs.”

She is definitely a good neighbor to local veterans, but she has also been one to the rest of the Greater Valley Area for her entire life.

Abney was born in the Plant City community of Lanett before moving to West Point and eventually Shawmut. There, she opened and owned Shawmut Floral for 37 years before retiring to Lake Martin for the past 14 years. She most recently moved back to Shawmut, where she participates in the community as much as she can.

“I think the neighbors, the people are good,” Abney said. “We have a lot of honest people here. I’m just part of it and I’ve been here my whole life. I go to the library and participate in the programs they have there. I’m active in my church too, I try to do whatever I can with that.”

She got involved with the 67th Auxiliary because of her husband Forest Abney’s service in the Army and National Guard later on. She feels it’s important to help out however she can, because of the sacrifices that the members of the military make every day.

“I thought that this was a good way of helping and supporting the military that my husband was in,” Abney said. “I didn’t know him when he was in the Army. I met him when he had come out of the army and was in the National Guard.”

Abney said she loves being part of the community, appreciates her neighbors and takes pride in what she does for America’s veterans.

“I know so many of the veterans and I feel that we can help them to make their days a little brighter,” Abney said.

VALLEY — Monday was the 150th anniversary of the holiday we now call Memorial Day. It began a few years after... read more