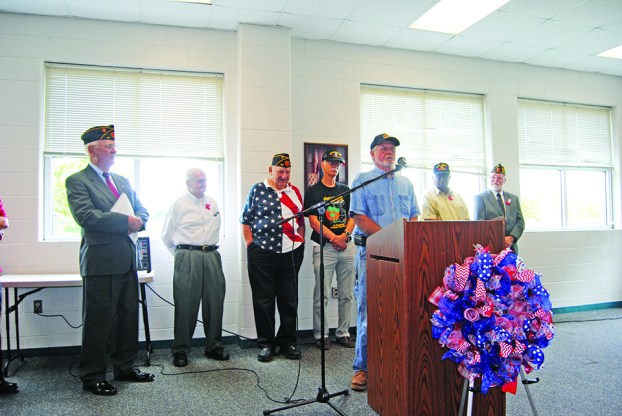 TALKING ABOUT THEIR EXPERIENCES — Veterans of the Vietnam War were recognized at Monday’s Memorial Day program at Valley Community Center. They were asked to come to the p[odium and state their name, what branch of service they served in and the years they were in Vietnam.

VALLEY — Monday was the 150th anniversary of the holiday we now call Memorial Day. It began a few years after the Civil War and was known as Decoration Day. Its purpose was to honor the sacrifices of the men in blue and gray who had died in a war that had claimed the lives of over 600,000 Americans. There have been more costly wars involving the U.S. since that time and the early Decoration Day holidays have taken the role off honoring all American soldiers who died in wars to defend our nation.

Locally, this national holiday was observed in a ceremony held in the Bobby Crowder Room inside Valley Community Center. It’s normally held outdoors at Veterans Memorial Park but was switched to an inside location this year due to the approach of Subtropical Storm Alberto and the uncertainty of the weather.

This year marks the 50th anniversary of the Tet Offensive, widely regarded as a turning point in the Vietnam War. A majority of the 14 local men who died in Vietnam were killed in combat in 1968.

The theme of this year’s program was to honor those local soldiers who died in Vietnam and to recognize family members who still live in the local area.

Post Commander Lanny Bledsoe t0ld a large gathering present for the event that Memorial Day isn’t just a day off work and a day to go to the beach and have cook outs.

“It’s all right to do that,” he said, “just as long as we remember the reason we have this holiday in the first place. Honoring those who died for our country comes first.”

“We have some memorials there that contain the names of 93 young men from our area who went off to war and made the supreme sacrifice. They made a sacrifice for the freedoms we enjoy today. We don’t live in a perfect country, but it’s the best one the world has ever had. Sadly, it appears to me that a lot of people in our country don’t appreciate the sacrifices our soldiers have made.”

Bledsoe  thanked everyone in the room for doing the right thing by being at a program to honor fallen soldiers.

“Freedom never comes cheaply,” said Mayor Leonard Riley. “The cost is always high and is paid for in the blood and lives of the men and women in our armed services who willingly put themselves in harm’s way to protect our nation and her citizens.”

“We owe these men and women our deepest respect, admiration and gratitude and should honor them for their sacrifice, not only today, but every day we – because of their valor – can continue to live in the ‘land of the free and the home of the brave.’ May God bless these men and women, their families, and may God bless the United States of America.”

Leak said it was an honor for him to read those names and that he’d known some of them before he went to Vietnam. He said that the man he replaced had been killed two days before he got there.

“I slept in his bunk my first night there,” he said.

He said that one of his best friends in the war, Chief Warrant Officer D0n Kilpatrick, was killed on a night mission. His son, Don Kilpatrick Jr., later was awarded a Silver Star for his actions in the Iraq/Afghanistan conflicts.

“He pinned in on the wall (in honor of his dad) at the Vietnam Veterans Memorial in Washington, D.C.”

Some family members of the 14 local soldiers were recognized. Ruby Hill, sister of Larry Adamson, said that her brother had been there on two months before he was killed. Two sisters (Jean Shirley and Mary Edwards) and a brother (Tom Callaway) of Lewis Callaway were present.

“I worked with Lewis before he went to Vietnam,” Leak said. “He was a nice guy, very kind to people.”

“He answered the call,” added Mrs. Shirley. “He was there only three months before he died.”

Valley resident Bennie Gross said he was proud of Billy’s service and was thankful for what the Legion was doing.

“He would be proud of you being here today,” said Leak. “I knew Frankie Simpkins. I went to school with him. He was a good man.”

“I was proud to serve my country when called upon,” said Williams, who at one point spent six months at Walter Reed Hospital in Washington, D.C. recovering from wounds.

“What we’ve heard today should give each person here a feeling for the sacrifices some people have made for our country,” said Bledsoe, citing statistics showing that more than 99 percent of our current population is not in military service at any point in time.

“We still have thousands of people in harm’s way,” he said. “Many of them serve multiple tours of duty. We need to keep them in our prayers and in our hearts. I thank those of you who served and the familes who are here today. Post 67 is always available to provide whatever assistance we can to today’s young veterans. We would love for you to join us and help with veterans’ issues. We meet at 6:30 p.m. on the second Tuesday of every month at Sunny’s Restaurant in Valley. We would love for any veteran to join us.”

One dead in Valley following argument

VALLEY — Officials have reported that one person is dead following a Saturday afternoon argument resulting from a property dispute.... read more