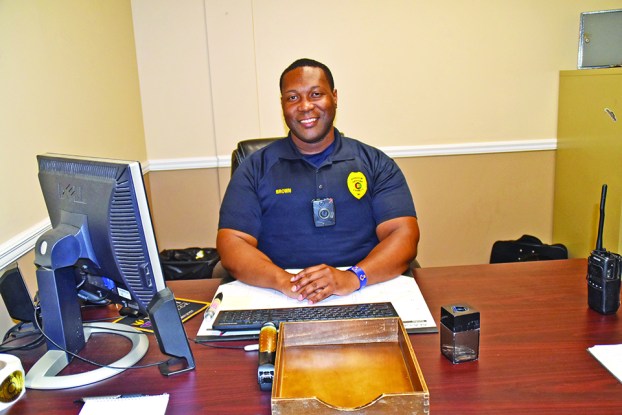 Happy to help: Lt. Willie Brown with the Lanett Police Department has spent the past 13 years building up relationships in the community.

Brown is making the community better

LANETT — Making the world a better place is a dream for most, but for Lanett Police Department Lt. Willie Brown, this is a 24-hour job he is happy to do.

Brown has been a police officer for the past 13 years, starting in Auburn in 2005 before moving to Lanett two years later.

“It’s a smaller community and there are more interactions with people,” he said. “I feel like I make more of an impact here.”

As a police officer, Brown performs many of the same tasks as other officers, most of it paperwork related, but even after more than a decade of service, the majority of his time is spent outside patrolling and interacting with the public.

“I try to implement community policing where I’m out on foot and talking to people,” he said. “It’s a different way of interacting with people and giving them a face to put with the badge.”

Brown describes his form of policing as a way for everyone to be accountable as they work to make their home a better place to live.

“I’m viewed as an officer and an individual,” he said.

Since attaining the rank of lieutenant a few years ago, Brown has been able to focus more on building a relationship with the community.

“It gives people a better perspective and creates more communication,” he said. “It’s no different from any other job where you try to treat everyone with respect and don’t look down on anyone.”

Over the years, Brown said he has seen a decrease in crime, particularly burglary and drug cases, and overall the community feels safer.

“We’ve got the resources and support we need,” he said. “We’re a team that benefits the city.”

Now, Brown is focusing on being a liaison with the community.

“People know me and will give me information that they wouldn’t to other officers,” he said. “It’s beneficial. People are comfortable around me.”

Brown added that he focuses a lot of time and energy on the kids he sees and strives to provide a positive influence to them as they grow.

“It’s a neat experience,” he said.

This effort to help children and the community at large has also spilled out to his personal life. When he’s not in uniform, Brown coaches little league sports at Valley Parks & Recreation.

“I like helping kids out and being a role model,” he said.

Brown is also working to further his training by getting a degree in Emergency Management from Columbia Southern University. He already has a Bachelor’s degree in Criminal Justice from Jacksonville State.

Two trucks received some significant damage in a Tuesday morning traffic accident on Veterans Memorial Parkway in Lanett. According to... read more