Chambers resting, looking ahead to fall 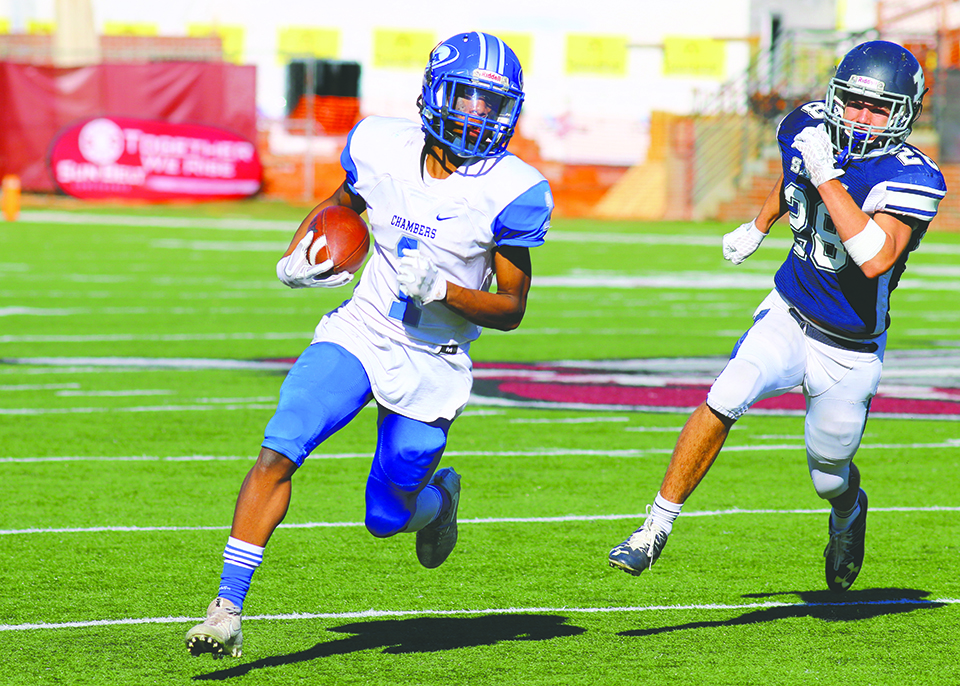 File Photo | Times-News Rushing the field: A Chambers Academy player rushes up the field during the 2017 AISA State Championship.

LaFAYETTE ––Chambers Academy will not be hosting a spring football scrimmage this year, as the vast majority of the school’s football team participates in year-round athletics and are in need of a break.

As a byproduct of being a small school, the Rebels, which are wrapping up the most successful all-around athletic year in school history, see the majority of their athletes play multiple sports.

“When you’re at a small school, there are kids who have played all three sports,” Chambers Academy athletic director Jason Allen said. “They’re kind of tired. They’re kind of burned out. They need to be kids for a little while.”

Chambers baseball made an appearance in this year’s Alabama Independent School Association state championship in Montgomery earlier this month. The boys basketball team made a Cinderella run to the state final four in February after posting a 3-13 regular season record. For the third consecutive season, the Rebels football team played in the state final last November.

The past 365 days have been good to Jason Allen, a former Chambers Academy graduate, who is also the school’s football and boys basketball head coach.

“I just feel blessed because this is my alma mater,” Jason Allen said. “We’ve just got great kids. That’s all there is to it. We’ve got great kids who are highly coachable, have great attitudes and great work ethic.”

The Chambers football squad operates a physical, run-heavy offense. This season, the running attack will be led by senior C.J. Lyons, who’s coming off of two consecutive 1,000-yard rushing seasons as a sophomore and a junior. Senior athlete Jordan Gillespie is a key component on offense as well, catching the ball out of the backfield and as a wideout, as well as sharing tailback responsibilities with Lyons. Gillespie rushed for approximately 500 yards last season before suffering an injury in the middle of the year.

Senior fullback Hayten Harris completes the backfield attack as a physical player who also has a combination of speed.

The running duo of Lyons and Gillespie isn’t new to Chambers, as both players have had older brothers who have gone through the same Rebel program under Jason Allen within the last five seasons. Lyons’ older brother, Malik, was once the State Player of the Year and Gillespie’s older brother, Christian, had a 2,300-yard rushing season for the Rebels in 2015.  Both Malik and Christian went to college to continue their playing careers, but have since decided to stop playing football.

The expected starter under center this season for the Rebels is sophomore Payton Allen, the 6-foot-3 son of Jason. Payton’s IQ and ability to make throws should make Chambers a much more balanced team this season.

The defense will be led by three-year starter and junior linebacker Braxton Allen, who tallied up 130 tackles last season.

The daunting question, however, for Chambers remains what will it take for the Rebels to get over the hump and bring home a state championship, after falling short three seasons in a row.

“I’ve put a lot of thought into that during the last three or four months,” Jason Allen said. “To me, you’ve got to have faith in what we teach in our system. Our kids believe in what we’re doing and you have to keep getting there. So we’re going to keep going, we’re not going to give up. We’re going to keep swinging the hammer at that wall until we knock it down.”