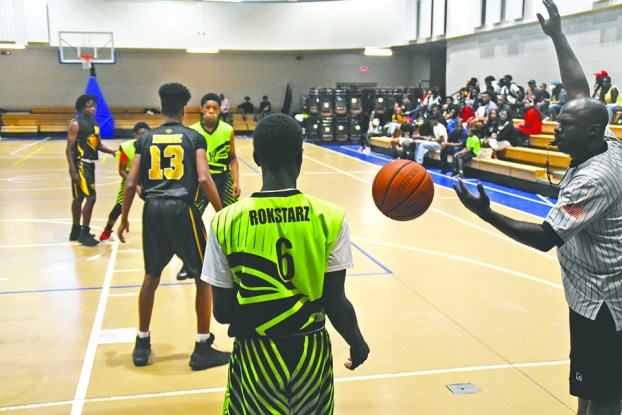 The Valley Community Center hosted a double-elmination basketball tournament over the weekend for many travel basketball teams. Tournament organizer Everett Thomas said he has four tournaments a year at the community center.

“It’s all about the kids, letting them play, getting them off the streets, mentorship,” Thomas said. “We have some good coaches here and we’re just trying to bring something to the Valley community.”

The Rockstars were playing one of the first games on Saturday morning and the matchup ended up becoming a thriller. Wearing lime green jerseys with a black trim, the Rockstars went bucket-for-bucket against their opponents in black jerseys with a yellow trim. In the waning seconds, the opponents hit a running layup on the right side of the basket to take a two-point lead. The opponents covered the entire floor getting back on defense, which ultimately forced an off-balance shot at the buzzer that bounced off the rim twice.

“We did well, we just needed to rebound the ball more and get physical,” Rockstars guard Isaiah Knight said.

This is Knight’s fourth year playing travel basketball, which runs leagues year round, according to Thomas. Knight said that he loves playing basketball because it’s fun and his ultimate goal is to play in the NBA. If he had to pick a team to play for, Knight said he would suit up for the Atlanta Hawks, because they are close to home. “Travel ball gives them a better experience than just playing school ball, because when you’re playing travel ball you’re playing different states,” Regina Bedell, Knight’s mother, said. “You’re playing different teams. So when you come back for the season of school ball, it helps because you’ve already built up yourself.”

Thomas came up with the idea to get involved with travel basketball around the age of 25. To him, the leagues keep the kids and adults off the streets.

“I’m just grateful to God for giving me an opportunity to be able to give something back, because when I was growing up, we din’t have this,” Thomas said. “I’m just appreciative of what Valley’s doing for these kids, giving them an opportunity to come here. I really appreciate that.”

Thomas offers travel basketball programs ranging from third through 12th grades as well as flag football hosted by the NFL and an adult basketball league in Auburn.

VALLEY — Bryant Hopkins is making a name for himself in the world of youth travel baseball. The nine-year-old received... read more