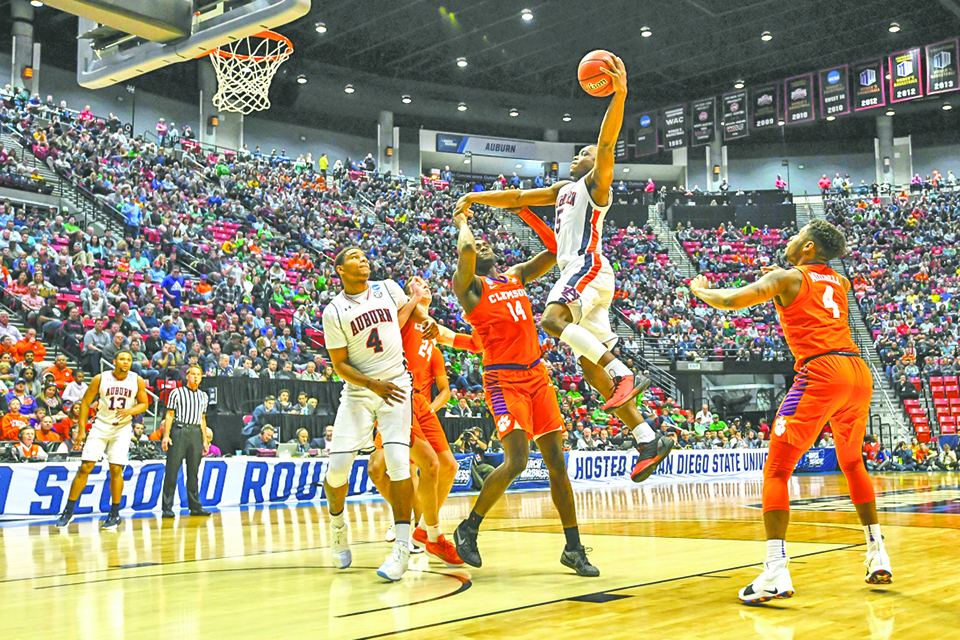 Mustapha Heron (5) Auburn men's basketball vs Clemson during the second round of the NCAA tournament on Sunday, March 18, 2018, in San Diego, Calif. Photo by Wade Rackley/Auburn Athletics

May 30 is the NBA Draft early entry withdrawal deadline for prospects to remain NCAA eligible for next season. That means that in under a week, sophomore s Mustapha Heron, Austin Wiley, Jared Harper and junior Bryce Brown have to make their decisions on whether they’re returning to The Plains or becoming professional basketball players.

“I have always dreamed of playing basketball at the highest level and now he is making that a reality for me,” Heron said when he first declared for the draft, according to an Auburn press release. “I would like to thank my coaches, teammates all the Auburn fans and Auburn University for a wonderful two years. Playing on The Plains was an experience like no other and I wouldn’t trade it for the world.”

Heron was the program’s first five-star recruit and became the fifth player in school history to score 1,000 career points in two seasons for the Tigers.

Harper had 185 assists last season, which is tied for the program’s fourth-highest in a season with Gerald White in 1984-85, Harper was named second-team All-SEC by the Associated Press and SEC coaches.

Brown averaged 15.9 points a game last season and he hit 107 threes, which was the second-most in program history for a single season. Brown’s defensive assignments were held to shooting 37 percent from the floor and he forced his assignments to commit 100 turnovers last season.

Wiley was the program’s second-ever five-star recruit and he sat out last season. He was named the 2017 USA U19 World Cup team captain where he averaged 10.3 points and 10.9 rebounds per game. Wiley participated in this past week’s NBA Draft Combine.

“I think as much as any player in the country who is testing the waters, Austin has the greatest chance to move up in the draft,” Auburn men’s basketball head coach Bruce Pearl said, according to an Auburn press release. “He’s in great physical condition and has worked extremely hard. He will be impressive at the Combine.”

Wiley has been projected the most to get drafted out of the quartet in mock drafts. A number of mock draft boards have Wiley going in the mid-to-late second round.

Last season, Auburn went 26-8 and were selected to the program’s first NCAA Tournament appearance since 2003.