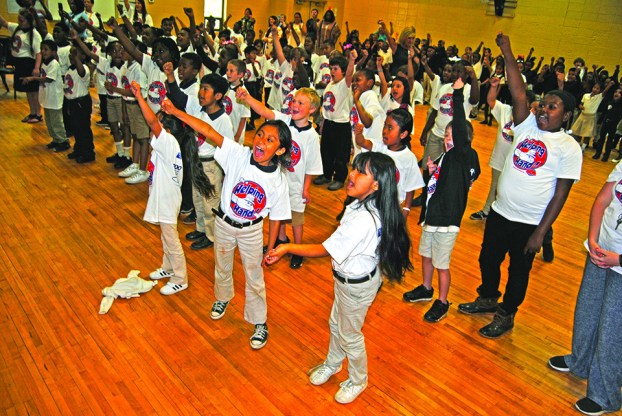 The program kicked off 10 weeks ago with a special appearance by Libby Liberty, a living, breathing, human-sized version of The Statue of Liberty. Libby is extremely popular with elementary students wherever she goes, and she encourages them to always be good citizens.

She wasn’t there in person on Friday, but she did speak to them via an on-screen video presentation. She urged them to take pride in themselves and in their communities and to stay true to the values of being a good citizen.

The second graders absolutely loved a slide presentation of Libby’s previous visit to the school. They got especially excited when they saw themselves, their teachers and their friends in the photos.

Libby led them in reciting the Super Citizen pledge and each student received a Torch pin symbolic of their being a Super Citizen. She appealed to them to always appreciate their teachers and what they do for them. “They are Super Citizen heroes who are with you every day,” she said.

The highlight of the program was the presentation of Hero Awards to members of the faculty who had been nominated by the students. The recipients included Jamie Heard, the principal, Media Specialist Candy Crance, teacher Rachel Loftin and school secretary/Spanish interpreter Tamara Reyes.

“Mrs. Crance is always helpful to us,” said Madison Williams. “We love it when she reads to us and leads fun activities.”

“Mrs. Loftin takes care of us in times of need,” said Parker White. “She is always telling us to be nice to others and don’t say bad things about them.”

Mrs. Reyes wiped tears from her eyes as Kayla Titus and Jakeria Frazier presented her with a Hero Award along with flowers. “She means so much to us,” they said.

VALLEY — The 2018 Hike/Bike/Run fundraiser for Valley Haven School once again topped the $100,000 mark on Saturday. All the... read more