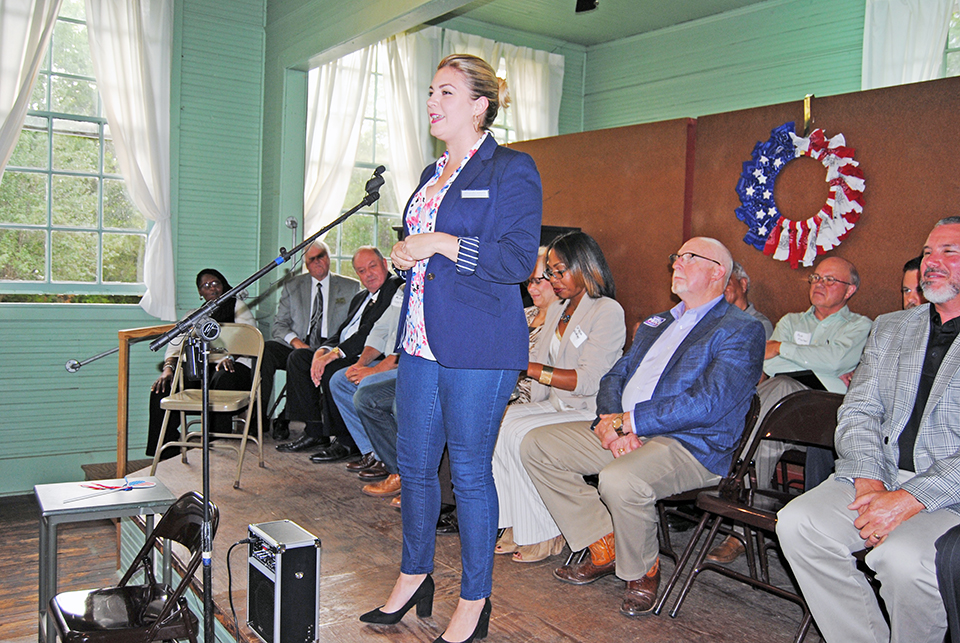 Wayne Clark | Times-News CANDIDATE SPEAKS: Congressional candidate Mallory Hagan of Opelika spoke of her support of children’s issues and her concern over the kinds of examples that are being set for them by our leaders.

FREDONIA — The Fredonia Community Clubhouse played host to a well-attended candidate forum Tuesday evening. With the Democratic and Republican primary elections less than three weeks away, there was good attendance on the part of the candidates and local residents who came out to hear them speak. That famous Fredonia food was a bonus attraction for everyone in attendance.

Among those present were candidates for U.S. Congress, Alabama Senate District 13 and House District 37, a judgeship in the 5th Judicial Circuit, a seat on the Alabama Board of Education, the District No. 3 seat on the Chambers County Commission and the offices of Chambers County probate judge and county coroner.

“I could not be more pleased with this turnout,” Judy Collins told the gathering. “This turnout is tremendous, and we welcome all of you. We want to promote good will among all people. We can disagree while appreciating each other’s differences.”

Stroud community resident Billy Earle was the moderator for the evening. He asked the candidates to be seated on the stage and went over the ground rules with them. Each candidate was allowed to speak for two minutes. When they reached the one minute, 30 second mark, Regina Barninger held up a bright orange sign with 30 (seconds) on it to keep them posted on their time.

The first to speak was Dr. Adia McClellan Winfrey of Talladega. She’s a clinical psychologist by training and is seeking the seat presently held by Mike Rogers. Her Congressional platform is based on the vowels: A for agriculture, E for education, I for innovation, O for opportunity and U for unity.

“I want to be a voice for the unheard,” she said.

Former Miss Chatt/Miss America Mallory Hagan of Opelika said that she had been raised by a village around her and that she wanted to be an advocate for children. “I’m concerned about the leadership we are presenting to our kids,” she said. “I have gone to Washington, D.C. to speak on behalf of children. I have fought for kids in this state and will continue to do so.”

Joe Blanks, the Democratic incumbent in Commission District 3, told the crowd that he had enjoyed his service on the county commission and pledged to keep trying to bring public water to the rural parts of the county. “I have enjoyed my eight years on the commission,” he said. “I would like to serve four more years, and who knows? maybe another term after that.”

Three of the four qualified candidates for Chambers County probate judge were present at the forum. They included the two Democrats, incumbent Brandy Easlick and Susan Harmon and Republican Paul Story.

Easlick said that she was grateful on having the opportunity to serve the county as probate judge for the past five years and said that she’d worked hard to implement some much-needed changes.

Easlick said that her experience as a practicing attorney and an accountant has served her well in her time in office.

Easlick’s Democratic challenger, LaFayette attorney Susan Harmon, said she believed that some changes needed to be made in the office.

Paul Story, who’s running as a Republican, said that better leadership is needed in the office of probate judge. “We need a leader and someone committed to service,” he said.

The race for coroner will be decided on June 5th. There are two candidates in the race and both are running as Democrats. Incumbent Jeff Jones of LaFayette said that he’d been in the funeral home business for more than 40 years, close to half that time as the owner. He said that it had given him much experience in dealing with people in a caring and compassionate manner when they are going through a crisis.

Challenger Mike Cox cited a 25-year career as a law enforcement officer for Valley Police Department as something that qualifies him for the job of coroner. He was the commander of the criminal investigation unit when he retired last year.

Isaac Whorten, who’s giving up his seat in the Alabama House, said that being a judge is a lifelong dream of his. He’s seeking the seat being vacated by Tom Young. Wharton is a 2006 graduate of Jones Law School in Montgomery and handled many cases before being elected to the House in 2014.

Wharton is unopposed as a Republican but will face Democrat Mike Segrest in November. Mike is the son of former Circuit Judge Dale Segrest, who served from 1982-2000.

The two candidates for the State Board of Education, Melanie Hill of Dothan and Adam Jointner of Auburn, both agreed that there’s too much standardized testing in
Alabama classrooms. Jointner said that he would bring a fresh perspective to the state board, having been a classroom teacher.

Darrell Turner, the Democratic candidate for the District 13 seat in the Alabama Senate, said that a new word needed to be added to “the Alabama dictionary:” public service.

Randy Price of Opelika, a Republican candidate for the District 13 seat, said that his experience in having grown up on a family farm and on having owned a trucking company had given him a strong sense of values.

Mike Sparks, another GOP candidate in the District 13 race, emphasized his extensive experience in Montgomery. He headed the Alabama Department of Forensic Sciences when he retired last year.

Bob Fincher, the incumbent in House District 37, said he was honored to represent the district and was proud of the fact he had not missed a single meeting since he’d been in Montgomery.

Fincher’s Democratic opponent, Charlotte Clark-Frieson of Roanoke, cited her experience as a teacher and manager of a family mortuary as life experiences that would serve her well in the state legislature. She has B.A. and M.A. degrees in education and a degree in mortuary science.