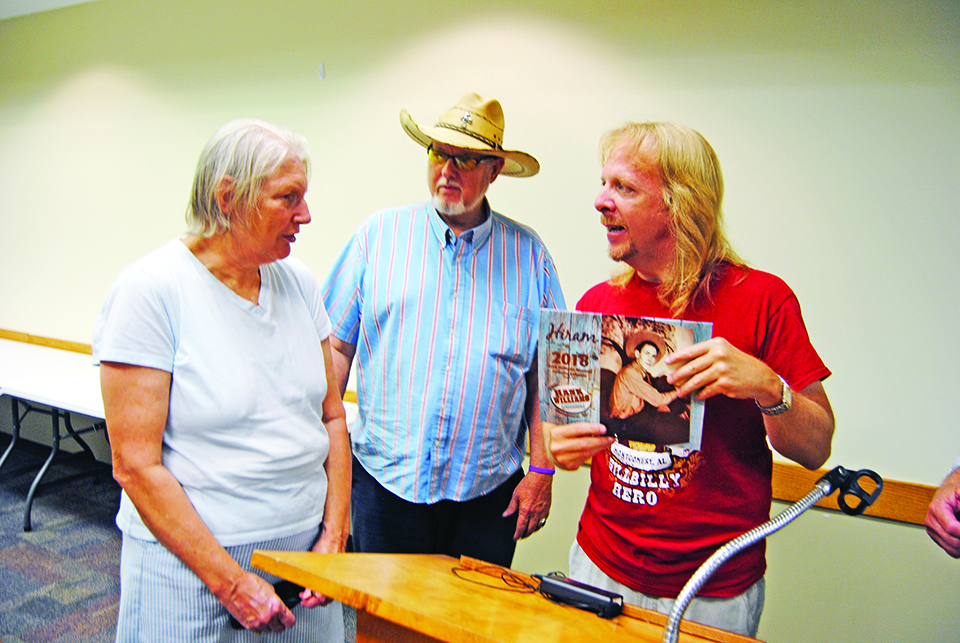 TALKING HANK WILLIAMS — Terry Faust (at right) talked about one of his heroes at Wednesday’s Lunch N Learn program at Btadshaw-Chambers County Library in Valley. Faust is a volunteer at the Hank Williams Museum in Montgomery and has talked to many people over the years who knew the country music superstar. Above, he’s talking with Frances Fornier and Bojack Weatherford.

VALLEY — At Wednesday’s Lunch N Learn program, Hank Williams Museum volunteer Terry Faust downplayed the long-held perception that Hank Williams had a serious drinking problem. A long-time friend of the museum’s founders, Faust was substituting for Jeff and Beth Petty, the museum curators, who could not attend the program.

Faust, who has been a Hank Williams fan since he was six years old, made the case that the famed country music singer died at a young age due to the overuse of prescription medication he took due to chronic back pain he’d had since an infant.

Williams was born with spina bifida and battled pain all his life. Even his stance on stage came about because of the way he had to stand due to back pain. The movement while playing and singing was a south Alabama thing.

While the cause of death may be debated, there’s no question about Williams’ influence on American music. He’s widely regarded as one of the all-time great singer/songwriters of the 20th century. He recorded 35 singles that made Billboard’s top 40 on the country music chart and 11 No. 1 hits including such classics as “Lovesick Blues,” “Cold, Cold Heart,” “Hey, Good Lookin’,” “Jambalaya (On the Bayou),” and “Your Cheatin’ Heart.”

Faust said he learned much about the real Hank Williams story by getting to know musicians who’d played with him.

Hank Williams was something new in country music. Faust said there were songs about trains, hard times and the good life.

“Hank would sing about his wife kicking him out of the house,” he said.

Faust has been a volunteer at the Hank Williams Museum in Montgomery since 2010 and has taken on the job of tending Hank and Audrey’s grave site in Montgomery’s Oak Hill cemetery.

One of the museum’s top attractions is the baby blue Cadillac convertible Williams once drove. The car is owned by Hank Jr. At one point, Dolly Parton made him a good offer to have it displayed in Tennessee. Collectors have offered lots and lots of money for it, but Hank Jr. wanted it displayed in Montgomery, a place where his dad grew up and got started in music.

“It’s worth the $10 admission price just to see the car,” Faust said.