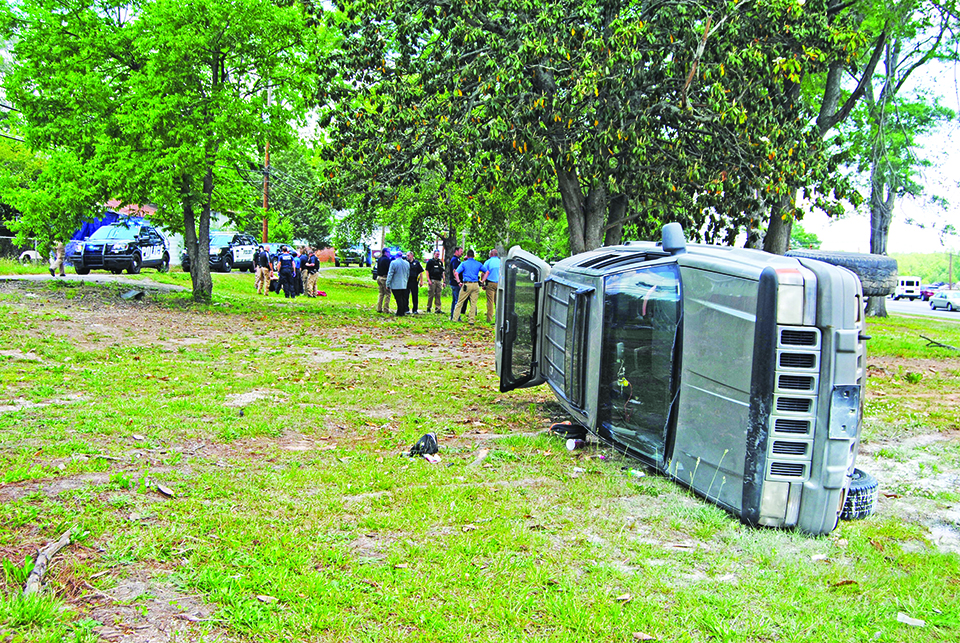 Wayne Clark | Times-News High-Speed Chase: An overturned vehicle, shown above, is the result of a high-speed chase that started near Valley High School early Friday afternoon. The driver of the vehicle was arrested and a passenger taken to the hospital for treatment of a broken wrist.

VALLEY — A high-speed auto chase that started near Valley High School at approximately 1 p.m. EDT on Thursday ended several miles up Highway 29 in Lanett when the fleeing vehicle overturned on a vacant lot near South 11th Street with police hot on his heels. The driver of the vehicle was arrested and a passenger taken to the hospital for treatment of a broken wrist.

It could have been a whole lot worse.

According to Sgt. M.J. Jones of the Valley Police Department, the incident began shortly after two VPD officers on patrol near the high school noticed a north-bound Jeep Cherokee with no tag on the vehicle. They attempted to make a routine traffic stop to ask about the tag. They got behind the vehicle but before they could turn on the blue light, the driver floored the accelerator, turned west onto 26th Avenue and then onto 61st Street past Langdale Elementary School and back onto Highway 29 with officers giving chase and seeking backup help.

Valley set up road blocks to keep people from turning onto the four lane and possibly being broadsided by the fleeing car. They also contacted Lanett police to alert them of a fast-moving vehicle headed their way.

Lanett officers were ready with some spike strips in front of the Lanett Mill site, but before the Jeep Cherokee could get there, the driver attempted to make a turn at a high rate of speed onto South 11th Street and flipped over onto a vacant lot across from A Cut Above beauty salon.

The driver, identified as Brian Preston, exited the vehicle and attempted to make a getaway on foot but was quickly apprehended by two Valley and two Lanett officers.

“He was very combative and verbally abusive,” Sgt. Jones said.

Preston has been charged with attempting to elude and a felony count of reckless endangerment (because the passenger was injured). He was taken straight to the Chambers County jail in LaFayette. Further charges from the Chambers County Drug Task Force are pending.

The passenger has not been charged.

Sgt. Jones said that officers from both Valley and Lanett responded extremely well on short notice.  The Valley officers did good work in keeping people out of harm’s way, and Lanett was ready when the fleeing vehicle entered their jurisdiction.

“I was most impressed with Lanett’s response,” Sgt. Jones said. “The acting chief, the code enforcement officer and four or five officers were on the scene when the speeding vehicle arrived.”

Sgt. Jones said it was a good thing the driver didn’t attempt to make Johnson’s Curve going at the high rate of speed he was going at, or he would have certainly wound up in Moore’s Creek.