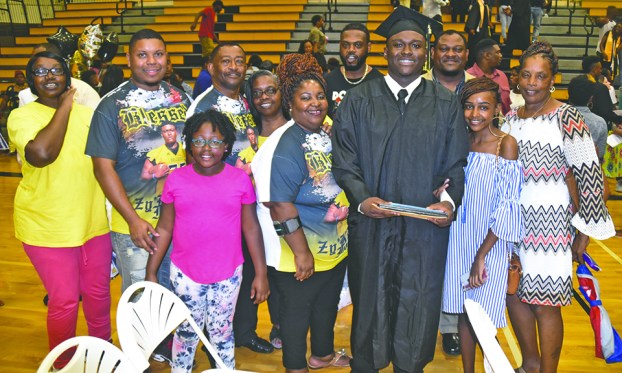 LaFAYETTE- Some would call it a miracle but Zy’Kevis Ingram recognized Dec. 6, 2016 as a wake-up call.

“I was talking to my father like, ‘I’m going to do better, I’m going to change’ and I told him that I loved him,” Ingram said. “Then I left the house.”

Ingram was already late to school because of the conversation he had with his father before leaving. In the days leading up, Ingram said that he was heading down the wrong path and would come back home at any hour of the night. He was on his way to pick up his nephew to go to school before hydroplaning.

“I went across the curb and I heard the back rim go ‘Skrtt!’” he said.

He blacked out as his Black Pontiac G6 Coupe Convertible was crushed by a white GMC pickup truck. He woke up on the passenger’s side floor with both of his legs still on the driver’s side. His fingers and arms were curled up as both of his wrists, hands, two fingers in his left hand, three fingers in his right hand and right femur bone were all broken.

“I never broke a bone in my whole life so it was really hard,” Ingram said. “The paramedics couldn’t even get me out with the Jaws of Life because it wouldn’t work. So they had to break the window, they had to put a towel on my head and all of that. They pulled me out the window and I still have scars down my arm.”

The paramedics then transported Ingram to East Alabama Medical Center.

“The first thing I remember is a lady standing over me saying, ‘you know you’re blessed, right?” Ingram said. “They cut my clothes off. I was laying down, I saw my mom and my dad come in there and they told me that everything was going to be alright.”

Ingram was then airlifted to another hospital in Birmingham where he had to get multiple staples in his stomach to stop the blood clots.

“I was crying and all of that,” Ingram said. “I just kept asking my dad, ‘Why did this happen to me?’ He would always tell me, ‘Why not you?’ They always told me that God gives his strongest battles to his strongest soldiers but it was scary. At one point my faith had to be strong because I wanted to play that next football season.”

In the midst of learning how to walk and write again during weeks of rehab, LaFayette High School head football coach James Lucas came to visit Ingram’s house. Ingram’s mother assisted “Zy” into the living room using a walker when the then-rising senior told Lucas about his future plans.

“I said, ‘Hey look, man,” Lucas said. “We’re going to have that position for you when you get back but right now just do what the doctors tell you to do. Pray in God and God is going to lead you back onto that field.”

Ingram worked every day to achieve his goal of playing in his senior season at LaFayette.

“I wanted to be out there with them when they won because of the love that I have for the game and I love being around those guys,” Ingram said.

With multiple plates in his hands and legs, Ingram returned to the Bulldogs starting lineup on Aug. 25, 2017, for LaFayette’s season opener against Dadeville. He began the season with a limp but he slowly gained his game speed back as the season progressed. Ingram played in all 12 games and the Bulldogs went 9-3, advancing to the second round of the Class AA AHSAA State Playoffs.

“That’s just a testimony right there itself that this guy has the desire, the love, the compassion, not only for God but these student-athletes and students here at LaFayette High School,” Lucas said.

Ingram was among the 52 students who graduated from LaFayette High School on Monday night. Friends, family and Lucas were all on the Bulldogs’ basketball court following the ceremony to embrace him and congratulate him on his latest milestone. A few family members dawned custom graphic tees with Ingram’s football portrait in the middle and the word “Blessed” coming across the top of the shirts.

A lot of Ingram’s supporters at the graduation were the same supporters who helped Ingram get through his lowest moments, he said. The family members constantly reminded Ingram to remain faithful to God to get him through whatever obstacles he was facing on the road to recovery.

In the fall, Ingram will attend Stillman College in Tuscaloosa where he plans on majoring in psychology.

“It’s a dream come true to graduate high school because the devil tried to take me out but God got me,” Ingram said. “God put this on me and now I have a purpose on this earth. It’s a real honor that God put this on me. I’m not really used to the spotlight and all of that, I’m not even used to this [doing interviews].”

Ingram, like most lineman, has been able to fly under-the-radar for most of his life but he admits that know his story has become public, he’ll have to get used to being around more people.

WEST POINT — There is a new location for the West Point Parks & Recreation Summer Playground Program. The longtime... read more