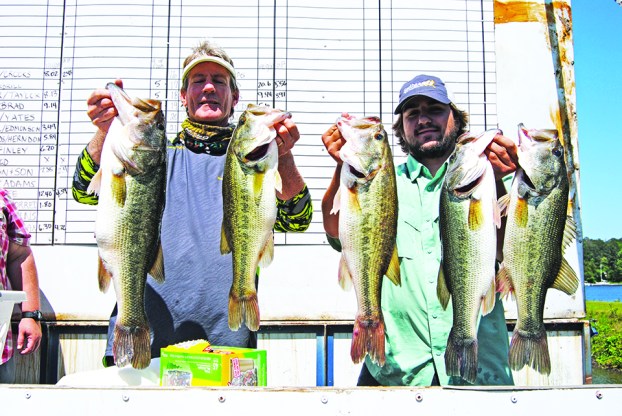 Wayne Clark | Times-News A GOOD DAY ON THE LAKE: Ken Bearden (left) and Mason Herren (right) of LaGrange had a really good day of fishing this past Saturday on West Point Lake. They caught five bass totaling more than 20 pounds in weight to take first place in the first annual Barry E. Smith Black Bass Fishing Tournament. They won $2,500 in prize money.

WEST POINT LAKE — On Saturday. Lodge No. 656, Free & Accepted Masons, Lanett, hosted their first-ever fishing tournament. It was well received by area sportsmen, and the lodge brothers are planning on having it again next year.

“We had 26 boats leave at safe daylight,” said Worshipful Master Barry Smith at Saturday’s 3 p.m. weight in at Southern Harbor Marina. “Southern Harbor and the Fractured Flamingo Restaurant have been very accommodating toward us and toward our anglers. We appreciated that very much. It helped make today’s tournament very successful.”

Smith said the main goal of the fundraiser was to generate some money for scholarships and for the organization’s building fund. The lodge plans to award three scholarships this year to deserving local high school graduates.

Saturday was an especially good day for Mason Herren and Ken Bearden of LaGrange. They carried home $2,500 for winning the tournament and catching the biggest bass. The biggest one weighed in at 5.56 pounds. Overall, they caught five bass weighing a total of 20.6 pounds.

Coming in second were Dennis Gaddy and Danny Kee of LaGrange. They reeled in eight bass with a total weight of 12.4 pounds. Brothers Michael and Sammy Bailey of LaGrange finished third with fish weighing 10.88 pounds.

Lodge members are in agreement to have a second annual Barry E. Smith Black Bass Fishing Tournament on West Point Lake but are undecided on what weekend to have it. They’d like to host it at a time of year when bass fishing is at its best on the lake.