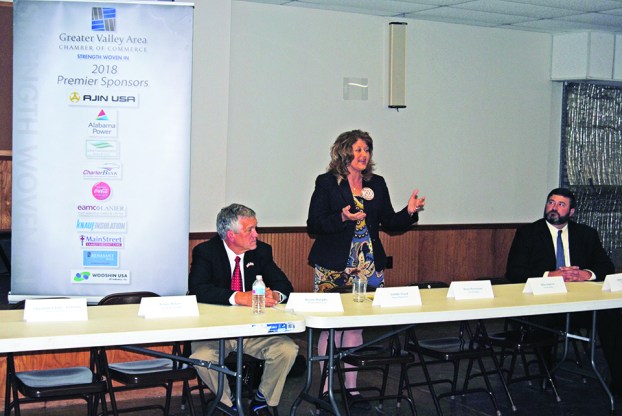 MEET THE CANDIDATES EVENT — Debbie Wood (at center) was one of a host of office seekers speaking at Tuesday’s “Meet the Candidates” event in LaFayette. She’s giving up her seat on the county commission to run for the District 38 seat in the Alabama House. The seatis being vacated by Isaac Whorton (at right), who is running for circuit judge. At left is Lee County veterinarian Bryan Murphy, who is also running for the District 38 seat.

LaFAYETTE — The Greater Valley Area Chamber of Commerce held a “Meet the Candidates” event Thursday evening at the Chambers County Farmers’ Federation building on the east side of LaFayette. Candidates seeking office in the U.S. Congress, state legislature, judgeships and seats in county government were invited to take part.

Those speaking at the event will be on the ballot in the June 5 Democratic and Republican primary elections.

Among those present were Thomas Sick of D.C. Casson (That’s his legal name – it’s on his Alabama driver’s license) and Maloreigh Todd, who spoke on behalf of Congressional candidate Mallory Hagan. Casson and Hagan are candidates for Congress, Hagan as a Democrat and Casson as an Independent.

Candidates for that office who spoke were Easlick, her Democratic opponent, Susan Harmon, and Paul Story, who is seeking the office as a Republican. Another Republican hopeful, former Probate Judge Cary Baldwin, was out of town and couldn’t make it, but Jim Cantrell was there to speak in his behalf.

“As elected officials, we are investors of your money. I understand that,” she said.

Lee County resident Bryan Murphy, who is seeking that same seat, said that he wanted to put more income in the hands of teachers, to have less emphasis on standardized testing and to repeal Common Core.

Bob Fincher thanked the Chamber for putting on the event and stressed the point that he’s very dedicated about being at all meetings and speaking on behalf of his constituents in District 37.

His Democratic opponent, Charlotte Clark-Frieson, talked of her background as a classroom teacher and the manager of her family’s funeral home business as life experiences that qualified her to represent the residents of District 37.

Possibly the happiest person speaking at the forum was District Judge Calvin Milford. He doesn’t have any opposition this year. He wanted to thank the citizens for being assured another term.

The two candidates for coroner, Jeff Jones and Mike Cox, cited their experience in dealing with families that have experienced a tragedy. Jones has been in the funeral home business in LaFayette for more than 40 years and has owned his business for close to 20 years. Cox recently retired from the Valley Police Department after a 25-year career, which included being commander of the criminal investigation unit.

“I love serving the public, and I would love to continue doing so,” he said.

Sheriff Lockhart asked for the citizens to keep all law enforcement officers in their prayers. He thanked county residents on having supported him for 24 years and
pledged to continue upholding high standards in the office.

“Drug dealers are running the streets,” he said.

Debra Riley, a candidate for the District 6 seat on the commission, said that she was ready to work in the team spirit of getting things done for the people of the county.

“I will make good decisions in your behalf,” she said. “I will be accessible to all of you.”

Johnny Yates, a candidate for the District 5 seat held by David Eastridge, said that he wanted to serve the citizens.

“Chambers County is a good place to live, and I want to serve the citizens,” he said. “I’ve enjoyed getting around and meeting the residents of District 5.”

James “Moto” Williams said he was running for the District 3 seat to give the voters a choice.

“I won’t make a lot of promises, but I will always give you a direct answer,” he said.

Paul Story, one of the candidates for probate judge, said that the two terms he’s served on the Valley City Council had given him some valuable experience in understanding budgets.

“The probate judge’s office should be open and accessible to all the citizens,” he said. “Filings should be done in a prompt manner, and the staff should be cross trained so that the work load doesn’t fall behind when someone is out.”

Susan Harmon said that she would be a people person as probate judge. In the early 1980s, she was one of the first female firefighter/paramedics in the county. She did that for 16 years and is now a practicing attorney.

Brandy Easlick thanked Chambers County residents on having allowed her to serve as probate judge for the past five years. She said the fact she has been a practicing lawyer and has an accounting degree is a very strong plus to have in the office. She said she’s been very busy during her term.

GVACC Executive Director Ashley Crane thanked the candidates for taking part in the event and commended them for their comments.