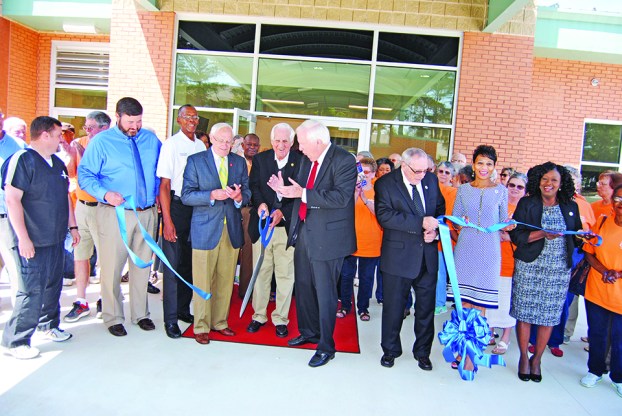 VALLEY — Wednesday was a day Valley seniors had looked forward to for a long time. It was the day a new $2.3 million senior center was dedicated. Pretty much everyone who’s active with the current center was there. Close to 40 of them were there wearing orange t-shirts with lettering on the back that proclaimed, “Grand Opening, Valley Senior Center and Dedication of the Donald Williams Activity Room, May 9, 2018.”

The dedication ceremony took place inside the new Activity Room.

“This is the largest room inside the new addition,” Mayor Leonard Riley said. “It is my privilege and honor to dedicate and name the Donald Perry Williams Activity Room. I believe it is a fitting and lasting tribute to the memory and most gracious generosity.”

Riley said that Williams had been a devoted and very active member of the current senior center located on Combs Street in the Fairfax mill village. When he died a couple of years ago he left his estate to the Valley Historic Preservation Commission with directions to use the money in the restoration of Bethlehem Church on River Road. There was a sizable amount of money in the estate – some $633,000 – but that was far less than what would be needed to restore the historic church building. Instead, city officials worked out a plan with the executor of the estate to set aside $125,000 of that money to restore the Bethlehem Church cemetery with the remainder going to the new senior center.

“Everyone involved in the decision felt that Mr. Williams would have approved of the use of his estate in this manner,” Riley said.

The project to build the new senior center extended over two fiscal years and was paid for out of cash flow. The city got a $2,3 million addition and incurred no debt. The city, in fact, is debt-free on the Community Center and Sportsplex. If all they had right now was the land to build on and started from scratch, it would likely cost them $30 million to build what they have now and owe nothing on.

“It’s been a difficult project,” Riley said. “The project contractor (Freeman & Associates of Columbus, Ga.) has been good to work with. They came in on budget. It’s a different story with the subcontractors. One of them walked off the job, putting us behind schedule.”

Riley noted that the new center had, in addition to the activity room, a computer room, a game room, and a dining areas. Just outside the new dining area is a covered walkway where seniors can enter the building without getting wet on rainy days. The $2.3 million project also included a greatly expanded fitness room for the Community Center, and lighting for the practice field behind the Community Center.

“We are very proud of this,” Riley said. “We can go up to 80 seniors now. The present center maxed out at 40. We will put the existing center on the market when we move out.”

At one time, that building was one of the nicer homes in Fairfax. It could be again if it gets the right buyer.

Riley thanked former Council Member Ray Edwards for his persistence in getting a new center.

“On the day I was sworn in as mayor he asked me when we were going to get a new senior center,” Riley said. “I told him that he should know better than me since he’d been working on it for 10 years.”

The first major project under Riley was a mold remediation effort for the entire city hall complex. The next project was a $2.4 million upgrade of Valley Sportsplex. That was done over a two-year period and has helped draw more tournaments to the city. The senior center came next.

The lead architect on the senior center, Greg O’Neal, is a 1987 graduate of Valley High.

“I was his principal when he was in high school,” Riley said. “He was the class salutatorian. I have really enjoyed working with him.”

Riley thanked Gerald Dial, the outgoing state senator, for always helping the local area on a variety of projects. Riley said that Dial had been especially helpful in getting $500,000 for a new wing at Valley High to replace a burned-out portion of the school in 1999.

Sen. Dial said that he’d visited Valley Senior Center many times and had lost at dominoes many times to Valley seniors.

“People are always asking me why I work so hard for seniors,” he said. “I always tell them it’s because I are one. That’s a whole lot better than the alternative.”

Dial said he was especially proud of the fact that at one point in his legislative career he had helped see to it that $2 million a year in oil and gas lease money be put in a meal delivery programs for Alabama seniors. Dial credited Valley seniors for their role in having a new senior center.

“You know how to put pressure on the right people,” he said.

The honor of cutting the ribbon for the new center went to Ray Edwards.

“No one ever worked harder for seniors than Ray Edwards,” Dial said. “I love him like a brother. There’s no greater honor for me than to be at the opening of a new senior center in my district. I have been to seven of them, and we will have one in Beulah in the near future.”

Riley thanked Edwards for working on behalf for seniors both in the 28 years he was a member of the city council and in his service as board chairman for the Alabama Department of Senior Services.

“Seniors are special to him,” said Riley. “They love the Christmas stocking program he does for them every year. The senior center has been his baby for a long time. I appreciate him so much.”

“This is a dream come true for me,” Edwards said. “I am so glad to have you all here today. It’s an honor to be here. I want to thank Sen. Dial, former State Rep. DuWayne Bridges and our current representative, Isaac Whorton, for what they have done. I want to thank Nancy Buckner, our DHR commissioner, and Tom Cotton, our ADSS commissioner, for being here today. They do so much for our seniors.”

“This new building turned out nice,” Riley said moments before the ceremonial ribbon was cut. “I am so pleased with it. It will be here long after we are gone.”

WEST POINT — West Point Fine Arts will be hosting its premier art exhibit on Friday, May 18 from 6-9... read more