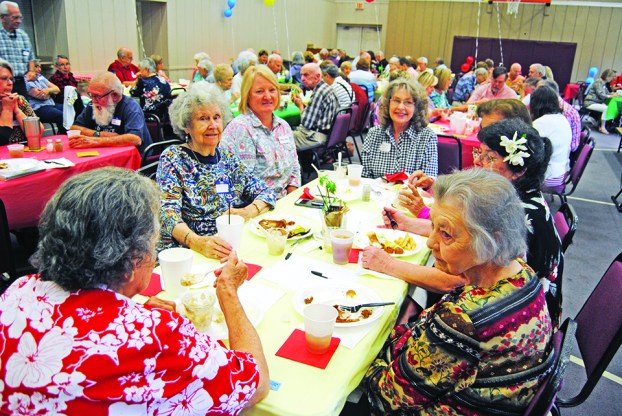 VALLEY — One of the better attended social events during the month of May in the Valley is the annual Langdale Reunion. It’s held each year in the family life center at Langdale Methodist Church.

This year’s reunion took place Saturday and once again the crowd topped 100 people. The crowd ranged from children to people in their nineties. The one thing they have in common is a love for the Langdale community. Everyone present either lived, worked, went to school or worked in Langdale Mill.

Langdale native Carey Wilkerson traveled 924 miles from Chickasha, Okla., to be there.

Sheriff Sid Lockhart was there to prepare the meal. Catfish plates with all the trimmings were ideal for a Saturday afternoon, and co-emcees Paul and Ellen Meadows did a great job of entertaining everyone with trivia quizzes.

The questions included: What year did the first school open in Langdale? Answer: 1880; When did the Langdale School burn? 1935; and When was Moore’s Creek rerouted from the mill to behind Johnson’s Store? 1905, among others.

People were given names of well-known Langdale residents of the past and asked what was the nickname everyone knew them by. This included Charles Bell – Bogie, Howard Clem – Froggie, and Dennis Crowder – Chicken, among others.

The fun ended with a points game. People could give themselves a point if they had ever done any of the following things: worked in Langdale Mill for more than five years, if they’d ever ridden on the CV Railway, if they’d attended the Langdale school for at least eight years, etc.

Those with the most number of points were given prizes. Lots of door prizes were given away as well.

Attendance was down a little from last year when close to 140 people came. In some years, attendance has been up around 200 people.

Some of the most faithful attendees have passed on in recent years, but there is still a strong core of Langdalians who like to come together for the reunion, meet old friends and share stories about the good old days.

VALLEY — It was smooth sailing for the Valley High School football team in its spring exhibition game on Friday... read more