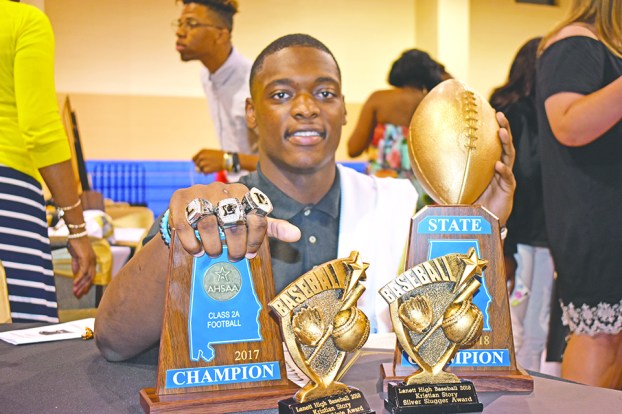 Lanett High School sophomore Kristian Story was recognized in every sport offered for boys at the Panthers’ athletic banquet on Thursday night. This past academic year, Story was on the varsity baseball, track & field, football and basketball teams.

It was a celebration of an unprecedented amount of dominance for Lanett High School. This past academic year, the Panthers claimed state championships in football, boys basketball, girls 4×400 meter relay, and the boys 300-meter hurdles.

“There’s a cooperative effort of togetherness between the football program, the basketball, baseball, and track programs” boys basketball head coach Richard Carter said. “Then I think [the success] comes from the dedication of the young men and women that the good Lord has placed in our program and in our school. They are hard-working, they’re committed and they’re intelligent. With a combination of those things, you can’t help but be successful.”

Many athletes walked out of the banquet with both hands full of trophies, certificates, and other memorabilia. At one point of the night, it appeared as if senior Braylon Harrington and sophomore Kristian Story were in a duel of sorts to see who would walk home with the most honors. Story was recognized in every sport possible, namely baseball, basketball, football and track & field. Harrington was awarded the boys track & field Golden Spike Award after winning the state championship in the 300-meter hurdles and was also recognized as a member of the boys basketball and football championship-winning teams. Harrington recently signed his letter of intent to run at Highland Community College in Kansas.

Coming into the ninth grade, Harrington said that he could’ve never imagined his prep sports career ending like this.

“Lanett represents a lot to me because they built the person that I am and the athlete that I have become,” he said after the banquet. “They took their time and formed me into the person that I needed to be in order to become successful.”

Not only were the athletes recognized for their accomplishments on the field, but also for their performance in the classroom and the attitudes they brought to their respective teams. Senior Octavia Wright was recognized as the girls basketball team and track & field team Scholar-Athlete of the Year. Senior Jawon Howell was honored for his character around the football and track & field teams as well.

“It felt great to know that the coaches noticed my attitude to be coachable, do what they asked me to do and just come every day to work,” Howell said. “I’m trying to leave something for the young guys to look up to and show them how to work.”

Chambers resting, looking ahead to fall

LaFAYETTE ––Chambers Academy will not be hosting a spring football scrimmage this year, as the vast majority of the school’s... read more