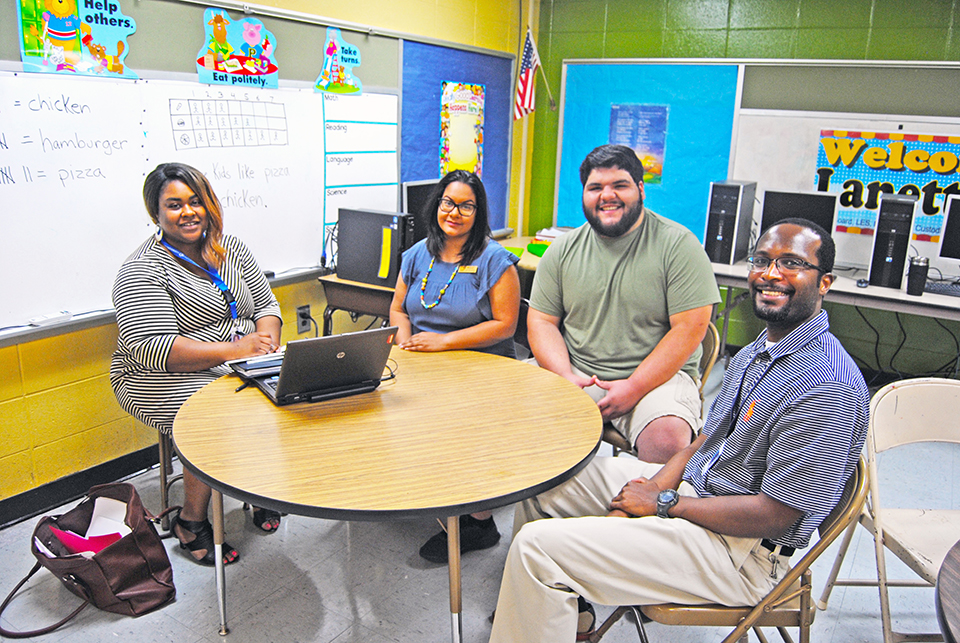 ENGLISH AS A SECOND LANGUAGE — W.O. Lance Elementary School is seeing some steady growth among students of Latino heritage. The school has been partnering with Southern Union State Community College in an English as a Second Language (ESL) program to assist parents in better understanding what their children are leaning in school. Taking part in the program, from left, are Charon Austin, ESL coordinator, SUSCC; Tamara Reyes, secretary/interpreter, W.O. Lance; Erik Velazquez, English Language Learners aide and nursing student, SUSCC, and Carl Jones, ELL instructor.

LANETT — There was an unusual graduation ceremony Thursday afternoon at W.O. Lance Elementary School. Instead of children receiving certificates of accomplishment it was their parents.

The parents are of Latino heritage and their children are students at W.O. Lance. Spanish is the primary language for these families. Both children and their parents are learning to speak English through local schools. W.O. Lance is partnering with Southern Union State Community College to accomplish this.

“Lanett is our first test site in Chambers County,” said Charon Austin, English as a Second Language Coordinator at SUSCC. “We have day and evening classes in Opelika.”

Austin is assisted by Erik Velazquez of Roanoke, who’s on course to be the first member of his family to graduate from college. He could earn a degree in nursing this time next year.

“We are partnering with Southern Union’s adult education program,” he said. “Our goal is to aid the community by encouraging parents to continue with their educational goals.”

There has been some explosive growth in Spanish-speaking people moving into the Lanett School District in recent years. Five years ago, there were five children at W.O. Lance who spoke Spanish at home. This year there’s 91 in Pre-K through sixth grade.

Southern Union was recently approved for a literacy grant that will help this program expand.

“We want to help people with their English language skills,” said Austin.

The greatest need in Lanett is to work with people who speak Spanish. In urban areas of Alabama and Georgia, there’s a need to work with those who speak Chinese, Arabic and Portuguese as well as Spanish.

“We are trying our best to grow,” said Austin. “We have gotten a $30,000 grant from Dollar General. We are really fortunate to have gotten it. We will have an evening education class soon, We will help with people who are gaining citizenship status. The ultimate goal is to get them into a GED program.”

W.O. Lance has children whose families are from Mexico, the Central American countries, Venezuela and Peru. In some cases, the families had to flee because of economic hardships and political strife.

Velazquez said that in working with the families he works with he can remember his own experience as a child growing up in Roanoke.

“I can see in their parents’ faces what I saw in my parents’ faces,” he said. “I had to translate when I was in the first grade. It is very difficult to come into a country and not speak the language.”

Tamara Reyes is both a secretary and a translator at W.O. Lance. As a native of Puerto Rico, she has U.S. citizenship. She’s been living in the continental U.S. since 1989 and in the Columbus, Ga. area since 2003. She said that she has really enjoyed her two years in Lanett but that it has been a challenge. She said that Columbus has a large Latino community. Spanish-speaking people can easily find places to go to church and Spanish-speaking businesses to go to.

Spanish is something millions of people from the Caribbean and throughout Central and South America have in common. Reyes said that she and the Spanish-speaking children at W.O. Lance can easily understand each other. “We can communicate, but there are different dialects. Having a common language helps to build relationships and to work with parents.”

A Latino community is fast growing in Lanett.

“They keep coming,” Reyes said. “We have gained over 30 new students the last two years. Many of the children here have smaller siblings at home.”