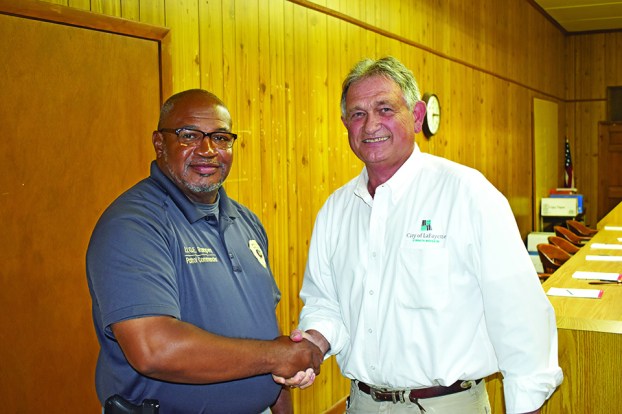 LaFAYETTE — Captain George Rampey of the LaFayette Police Department has been named the City of LaFayette’s new chief of police.

The unanimous decision came Wednesday night at a specially called city council meeting. Mayor Barry Moody detailed the process used to select the candidate they deemed appropriate for the job.

The selection process began by choosing a three-person police committee who reviewed the qualifications of all applicants. From there, four finalists were chosen and interviewed until only two remained.

“We asked every candidate the same questions and gave them the opportunity to discuss the accomplishments that they’ve had throughout their career,” Moody said. “From those discussions, I stepped out of the meeting and turned it over to the police committee to make a recommendation.”

Matthew Hurst of District B spoke for the police committee Wednesday and officially named Rampey as the new police chief.

“We interviewed some fine candidates for police chief. They brought a diverse set of qualifications to the table,” Hurst said.

The council discussed the new chief’s $50,000 a year salary that will be periodically evaluated by the police committee after 90 day and six month periods for levelization. The Mayor then shared his thoughts with the new chief.

Moody said he had full faith in Rampey to keep the police in line with the rest of the city departments.

Rampey has been with the LaFayette Police Department for 21 years and in Chambers County law enforcement for 25 years. He was promoted to the rank of Captain in February and has been serving as the interim police chief since the position became vacant.

Rampey will be officially sworn in at the June 11 city council meeting.

In other action, Moody, in an attempt to clean up the city, proposed that the council discuss a bill that would allow LaFayette to clean up properties around the city that are privately owned and charge the property owner for the work. This will be discussed at the council’s next meeting.

LaFAYETTE- Some would call it a miracle but Zy’Kevis Ingram recognized Dec. 6, 2016 as a wake-up call. “I was... read more